IPB University Lecturer: Herbs and Spices Suspected of Inhibiting Mortality Due to COVID-19 in Asia 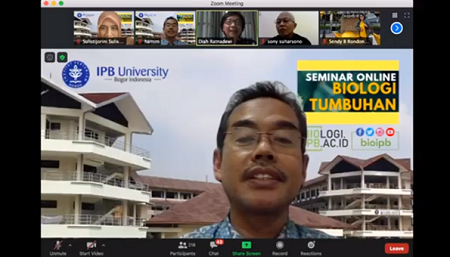 Prof. Dr. Suharsono, IPB University lecturer from the Department of Biology, Faculty of Mathematics and Natural Sciences (FMIPA) talked about the potential and application of genetic modification for crop production. In his presentation at the Plant Biology Seminar, (22/7), Prof. Suharsono said that genetic modification has been commonly applied to the agronomy industry. For example, by combining the genomes of two plant varieties in order to get better characteristics and productivity or by adding genes to be resistant to certain diseases. For example in F1BC3 rice whose crop production is similar to Ciherang rice but it is resistant to blast disease.

In addition, genetic modification through mutation can also be applied to obtain new varieties. For example in the IPB CP3 variety potatoes. This method can be applied to agro-industries starting from seed, tuber, and processed industries. Another case with genetic engineering in vitro, for herbicide-resistant crops such as corn. However, several things must be considered to apply the results of research to the industry, especially regarding legality and economics. "Sometimes legality becomes deathvalley innovation, stopping here because of what? It's hard to take care of legality, especially for GMOs, "he said.

On this occasion, several lecturers from the Plant Biology Postgraduate Study Program also spoke, including Prof. Dr. Yuliana Maria Diah Ratnadewi who delivered about plant secondary compounds to deal with COVID-19. Responding to the phenomenon of low mortality by COVID-19 in Asia, one of them is suspected by the factor of the type of food consumed, especially herbs and spices that are closely related to secondary compounds from plants.

Plant secondary compounds can be used as an immunomodulator to strengthen the body's immunity and fight free radicals that can weaken the immune system. By consuming foods rich in antioxidants, vitamins, and phytochemicals from fresh plants, this can be achieved. "Phytochemical mechanisms in dealing with viral infections in the body one of them by inhibiting viral replication. Therefore, the potential of medicinal plants in Indonesia can be part of modern medicine, "he said.

Dr. Hamim was also present to deliver about the development of C4 plants to support the food independence program. Based on Indonesia's ecophysiology which is the optimal condition for C4 plantations, its development will be considered very good. However, it requires hard work and cross-sectoral collaboration to make it happen. For example, The C4 Rice Project, initiated by IRRI in 1995, could only move forward after being supported by the Bill Melinda Gate Foundation in 2008. The difficulty of regulating the C4 plant mechanism was also one of the reasons for how slow the project was developed. However, Dr. Hamim found an interesting scientific journal, published early in 2020, about the Golden2-Like (GLK) gene which might be a solution to the obstacles encountered before.

In addition, there is also a brief explanation of the graduate program in Plant Biology that has developed from the 80s. The study program, which was officially established in 2007, has been accredited A by the National Accreditation Agency for Higher Education (BAN-PT) for both master and doctoral programs.

In addition, as a study program that has a vision as an international standard study program, cooperation has also been established with both domestic and foreign institutions as. There is also a study program that is nurtured by two divisions namely plant ecology and resources as well as plant genetics and physiology. (IAAS / NAS)