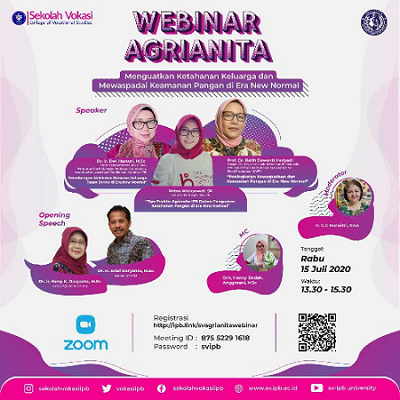 Since the government has applied social distancing and Work From Home (WFH) policy, simultaneously starting from 16th March 2020, the society has been obliged to do self-quarantine and do activities, such as study, work, and pray, at home. Those policies then followed by School from Home (SFH) policy.

“When WFH was combined with SFH, the role of woman, either as worker or housewife, has been expected to encompass at least three roles. Woman has roles to finish their job as worker at home, to be a teacher who accompany her children doing their schoolwork, also to ensure that food supply for family needs is fulfilled.

Knowing that pandemic will not be over soon, Healthy lifestyle to increase our immune with prevention action is very needed. The example is to carry out optimal stimulation, detection, and early intervention about children growth and development by conducting education from home.

The Dean of Vocational School IPB University, Dr Arief Daryanto, explained that several experts predicted the pandemic will be over in the middle of June 2020. But, economists said that the effects of the pandemic will still be felt until the end of 2020. Related to that matter, economic crisis which could be followed by food crisis might be happened. Therefore, the webinar was aimed not only to give knowledge and illustatration, but also understanding, especially for mothers as the main role in mantaining the food security in the new normal era.

In the presentation from Dr Dwi Hastuti which was named “Maintaining The Relationship of Family without Stress in The New Normal Era”, She explained that in the New Normal Era, the opportunity of mother and children being together is bigger because all activities are done at home. That condition could develop an emotional bonding with children and build a positive habits through communication, sharing, and learning together in the new normal. The key to solve and control the emotion while doing SFH is about self control-grateful-thankful as a family member.

Meanwhile, Prof Ratih said that safe food is the result of accumulated control by all parties in the food supply chain. At the household level, safe food control consists of danger zone, storage, thawing, cooking/reheating, cleaning, separating, and usage of water. While at Industrial level, food control could be done by reading labels on processed foods which have been packaged.

“There are three factors which highly affect the supply of family food, i.e. food availability, food price stability, which become the priority for mothers when the price is very fluctuating, and also food accessibility. A mother must have the knowledge and skill to encompass as economic regulator in family, the creativity to carry out food diversification and also the creativity to utilize house yard to grow various food crops. Seeing the importance of food security in the new normal era, Agrianita also holds events related to house yard utilization called Program Agrianita Mandiri Pangan-Gerakan Pemanfaatan Lahan Pekarangan,” she said.

There are three categories of land utilization for Agrianita IPB University, starts from hobby scale (following trend), consumption scale (integrated land utilization, not only plants but also fish and livestock), and bussiness scale. Besides Sapa Agrianita activity, there is also a program called Program Koin Agrianita, a charity movement which is aimed to support the welfare of IPB University community. (IAAS/ISL)