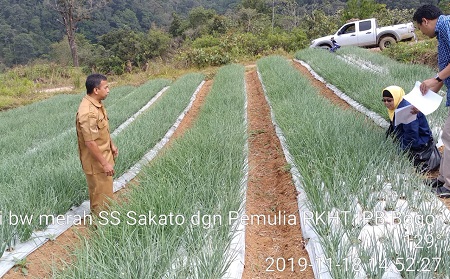 Research on the commercialization of this new variety of shallots is a continuation of previous research conducted by the Center for Tropical Horticulture Studies (PKHT) Research and Community Service Institute (LPPM) IPB University. This shallot variety of red onion has advantages in terms of high productivity for lowland shallots reaching 16 tons per hectare. This variety is also able to adapt well in the dry season and is resistant to rain, has a very sharp aroma so that it is suitable for use as raw material for fried onions, has an adaptation area in the lowlands of Nganjuk Regency. While the shallot variety SS Sakato has a high productivity reaching 28 tons per hectare and has an adaptation area in the highlands in Solok Regency.

The seeds of these new varieties are not yet available in large quantities. The variety needs to be commercialized because it has been released and proven to be superior in the field. With the availability of high quality seeds from the two new varieties, it is hoped that they can increase productivity and support the stability of national shallot production. This new variety of shallots will be very in demand by both producers (farmers) and consumers (households and industries) if they have been well commercialized. If the seeds are available in large quantities, farmers will plant them on a large scale because they have high yield potential.

This new variety of onions is very different from imported shallots, especially in terms of aroma and adaptability. Tajuk shallots have a very strong aroma and are suitable for the tastes of the Indonesian people and their adaptability is very good in the lowlands of Indonesia. SS Sakato red onion has bulbs that are quite large and adaptable in the highlands. While imported shallots have a less strong aroma and do not have good adaptability to the agro-climate in several production centers in Indonesia.

This shallot has become a staple commodity that cannot be substituted for other products. Thus, if there is supply volatility throughout the year there will be price fluctuations in this shallot commodity. The onion price fluctuation will have an impact on people's accessibility in meeting food needs and also affect the condition of the national economy.

Based on the publication of inflation data from the Central Statistics Agency (BPS), staple goods are still commodities that can cause inflation. In January 2016 the inflation value was 0.51 percent and shallots contributed 0.9 percent or included the largest contributor to inflation along with chicken meat and electricity tariffs (Ministry of Trade 2016). National shallot production in 2018 is 1,503,436 tons with the assumption that the price of Rp 10 thousand per kilogram of the economic value of shallots reaches Rp 15.03 trillion per year.

At present the production of shallots is dominated by Brebes with around 19.32 percent of national production. This condition causes the price to increase if the onion production in Brebes is disrupted. This can be overcome by spreading shallots production centers to other areas that have different land and climate characteristics than Brebes.

The commercialization research activities of this new variety of shallots will involve users of varieties, namely seed producers, farmers, processed shallot producers and consumers (marketers) so that the products produced can be immediately accepted by the market. Partner involvement is needed at the field testing and onion seed production stages. Field trials will be carried out in farmer's gardens with seeds and production facilities provided by the activity manager, while land and labor are provided by partner farmers. New varieties of shallot seeds, Tajuk and SS Sakato will be mass produced in collaboration with breeder farmers or seed producers. The varieties obtained and the technology developed will be commercialized in several production centers through collaboration with producers or seed breeders.