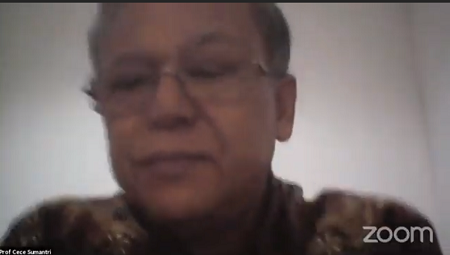 Meanwhile, Prof. Dr. Cece Sumantri, a lecturer at IPB University who is the Head of the Animal Breeding and Genetics Division, Faculty of Animal Husbandry touched on strategies to improve local animal genetics to increase local livestock production and the quality of functional food products. Local livestock are considered the most likely to be functional food because they can be designed according to their genetic potential, ranging from meat production to milk.

"The genetic resources of native and local livestock have a lot of genetic wealth so they can be of high economic value and quality. Local livestock meat production is still low because the community still relies on broiler chicken meat, "he said.

According to him, sustainable businesses are needed in groups from upstream to downstream to increase ruminant production and quality. Genetically, Indonesia has the potential for the formation of a new nation by crossing existing local cattle in a directed manner. And overall, these improvements emphasize more on population multiplication and improve meat quality because it has the highest economic value. One of them is by utilizing the stearoyl coa desaturase (SCD) gene to improve the quality of meat characteristics.

Improving the quality of milk can also be done by seed classification based on milk production using the type of Friesian Holstein dairy cow (FH) utilizing the k-casein gene to increase protein levels based on research in Singosari and Lembang.

In addition, Prof. Cece explained that IPB University had developed local chickens of type D1 to D3 that were resistant to disease and compared to broilers, the quality was better and certainly healthier. He also mentioned that other types of poultry such as entok have the potential as a source of cheap protein and economic value in the future.