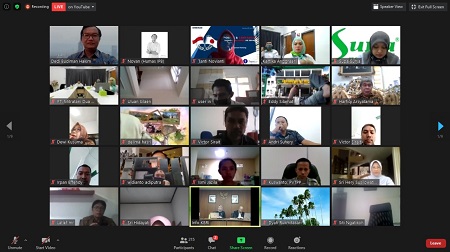 COVID-19 Pandemic has weakened the global economy. Export-import activities have been hampered because the change of the protocol and regulation about export-import limitation. Japan, as one of the biggest Indonesia’s export destination, has also suffered economic slowdown. That matter affects the export market of our country.

In response to that matter, International Center for Applied Finance and Economics (Intercafe), Institute of Research and Community Service (LPPM) IPB University held a webinar themed “Prospect and Challenge of Indonesia’s Export to Japan” (29/6). The agenda was held by collaboration with Indonesian Economist Association (ISEI) and Economics Science Master’s Degree Program of IPB University.

In her speech, Prof Dr Nunung Nuryartono, The Dean of Faculty of Economics and Management (FEM) IPB University said that japan is an important partner for Indonesia in trade sector. However, the balance of trade from both Indonesia and Japan has decreased during the pandemic period.

“Japan becomes an important trade partner and even reach the second rank with 10.81% share from our country’s total trade in overseas. Instead of a problem, this pandemic period should become the challenge for our country to increase the trade activities. Agriculture also becomes the main commodity of export. We have a big potential in this sector,” she explained.

Meanwhile, Prof Dr Noer Azam Achsani, The Head of Indonesian Economist Association (ISEI) in Bogor also The Dean of School of Bussiness IPB University, explained that pandemic period has affected import and export. One of the impact is caused by change in consumer behavior, corporation, and government. Related to export and import, There are some changes like the trend of cross-country online shop.

“Our exporter must understand the change of consumer behavior in Japan to fullfil the market needs. Besides that, communication becomes easier by utilizing information technology. This megashift is important to be concerned by all parties involved in export and import,” said Prof Noer Azam in his speech.

Arief Wibisono, as the Trade Attaché of Indonesia in Japan also mentioned that, generally, export structure of Indonesia is still dominated by primary product. Manufacture and industry product still a few. While Japan market still needs manufacture product from foreign countries. This period is the worst economic period for Japan and a big opportunity for exporters to penetrate their product.

“the relationship between Indonesia and Japan is very natural. Japan is one of the biggest trade partner and investor for our country. In the pandemic period, not only primary products from Indonesia which can be penetrated, but also manufacture products. The big opportunity for exporting to Japan is opened for frozen food products of fisheries,” said Arief Wibisono.

“Indonesia produce main agricultural commodities which are usually imported by Japan. The average import duty is relatively low. Besides of that, The distance between Indonesia to Japan is near compared to European and other Asian countries. Not only the logistic cost becomes cheaper, but also algricultural products is perishable so that Japan is very strategic as Indonesia’s export market,” said Dr Sri Nuryanti. (IAAS/ISL)