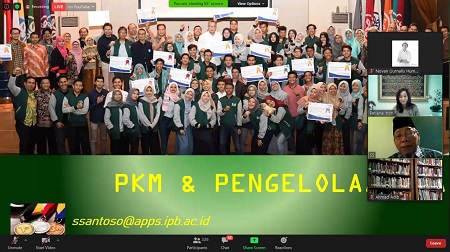 Student Creativity Programs (PKM) is a familiar activity to academics in universities. This annual program is a prestigious event to enhance the creativity and role of students in society at large. The PKM activity are in line with the Independent Campus program that emphasizes the freedom of the students to act in solving problems.

Responding to that, center of Human Resource Development (P2SDM) Research and Community Service Institute (LPPM) IPB University held a web seminar (17/6) titled P2SDM CAN Series. This activity was included in the series of 15th Anniversary P2SDM IPB University activities. Participants registered in the activity was as many as 700 people, who came from various institutions.

In his remarks, Dr Amirudin Saleh, Head of P2SDM IPB University said that the acceleration of PKM Programs is continuously encouraged by IPB University. This pandemic period cannot be a reason for students to let their creativity to go down. Because according to him, this PKM is very supportive for the Independent Campus concept.

“We welcome the Independent Campus concept that is implemented by the government. Today’s discussion is hoped to open new insights. This 4th series webinar is a part of the 15th Anniversary of P2SDM. Happy discussion for every participant,” he said.

Attending as a presenter is Dr Sugeng Santoso, National PKM Jury also an IPB University lecturer who revealed that PKM program has many benefits. One of it is to be the most popular activity with an effective term. This activity is annually attended by tens of thousands of students from various fields of studies. The main goal is to solve problems in the community.

“This PKM is aligned with Independent Campus, where students can learn outside of the campus. This creativity development is carried out in fields of research, services and entrepreneurship. Recognition as one of the student activity to fill Semester Credit Unit (SKS) is also wide open. But, this year there is a possibility of PKM system will be changed according to the conditions,” added Dr Sugeng.

In line with the previous speaker, Sukma Nugraha, MM, Dean of Faculty of Entrepreneurship, University of Garut also mentioned that this PKM program can be a moment to enhance the entrepreneur spirits in students. According to him, students have to keep on developing their potentials by participating various activities. Campuses also have to facilitate students to continue learning and developing their potentials.

While Ahmad Adib, Ph. D, lecturer of Sebelas Maret University said that he strongly agrees with the Independent Campus concept. Students are given the authority to think critically to design problem solvers for national problems. According to him this is very accurate for millennial students who have high creativity. Independent Campus makes students ready for work or entrepreneurship.

“Students must be equipped with the ability to recognize potential and solve problems, to be ready in the working world. This new policy is not easy to be implemented if not supported by the campus bureaucracy. Every party especially the campus must be able to encourage this concept so it can run optimally,” said Ahmad Adib. (IAAS/ELS)