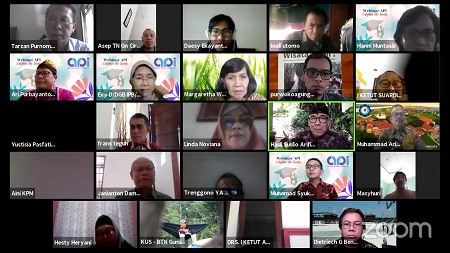 The Chairman of the Indonesian Professor Association (API), Prof. Dr. Ari Purbayanto, explained that the tourism sector will be first opened after the ratificiation of a new normal policy from the central government, namely the tourism sector in Bali. On its policy, Bali is the first location to be given relaxation instrument in attracting foreign and domestic tourist visits.

"We need to prepare things that need to be done before the relaxation period in this tourism sector. Preparations must be prepared, then the community must also anticipate this, hence we can address this disaster, "explained Prof. Ari Purbayanto at the API Webinar online, Monday (1/6).

However, the Acting Deputy for Resources and Institutions of the Ministry of Tourism and Creative Economy / Tourism and Creative Economy Agency, Dr. Frans Teguh explained that the tourism sector crisis began with a health and economic crisis. Therefore, the solution that offered should be a solution that provide a better understanding that there must be enermous efforts to address global and national health problems, including the economic problems.

"In the future, what we need to strengthen is about the how that tourism can actually centered on humans, on society, people centered tourism, so that the community based tourism is not just a product but rather as a learning process to increase the resilience with the local wisdom, hence it remains a unique selling point, "He explained.

Some efforts have been made in dealing with the tourism sector crisis, Dr. Frans Teguh explained that in the further era of new normal tourism, virtual tourism will become a new era in the tourism sector. Meanwhile, hygienic behavior and reducing physical contact were becoming a new normal as well as a challenge for the development of tourism sector. On the other hand, there are needs to be a shifting point of tourism products and the creative economy in the future.

"There will be a shifting or transformation on the tourism products and also includes the creative economy in terms of its attractiveness, effort, transportation, accommodation, and hygiene labeling. Although on this time, those things has not received full attention, I think in the future, this will become a mandatory packacge in the tourism sector. It is also needs to provide added value so that the idea of sustainable tourism can be realized, "he concluded.

Inlight to the sustainable tourism, Prof. E.K.S Harini Muntasib explained that the current condition is an opportunity to implement the concept of ecotourism or sustainable tourism. "This is our chance to return the model into ecotourism. Because, aside from its economic factor, ecotourism also educates the community in the context of protecting the nature," she explained.

In ecotourism, continued Prof. Harini, it is necessary to uphold the idea of local wisdom that can be done by cooperating with various stakeholders such as local governments, local communities and the tourism industry. In this new era, the ecotourism management model is oriented to the modified concept of destination management organization (DMO).

"Sooner or later the selling (tourism) packages would be an interpreted packages. So that, the visitors when they are going to the (tourism) place not only for have fun, but also have a perception about the tourism resources by themselves. But we also need to pay attention to the aspects of public safety so that the visitors can enjoy the resource safely, "added Prof. Harini.

She also further explained, in order to increase the public awareness of environmental sustainability, it is necessary to educate the society, especially to the visitors. In addition, the concept of developing new era ecotourism required various things such as instruments, incentive systems, enabling conditions and policy support for the stakeholders ofecotourism. (IAAS/RI)