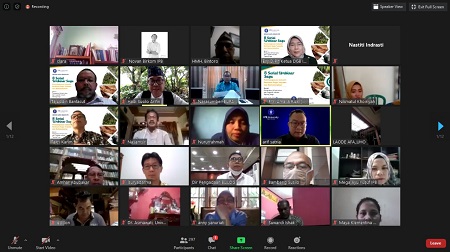 The food crisis became unrest in every country during the pandemic. In response, the Council of Professors (DGB) of IPB University held an online seminar on sago, as an alternative to staple food. The activity titled "8 Sago Webinar Serials" was held on 19/05 through the Zoom application. This discussion is the first in a series of eight discussions about the planned sago commodity.

Prof. Dr. Evy Damayanti as Acting Chair (Acting) Chair of DGB IPB University said, this seminar carried the big theme "Integrated Sago-Based and Sustainable Industrial Development". The first series deals specifically with strengthening the infrastructure and logistics of the sago flour industry. "This series of discussions will be carried out in depth and the results will be made a policy brief to be proposed to the government. Each series will produce main problems, solutions, and policy points. The speakers are not only cross-disciplined academics, but also technocrats, entrepreneurs, journalists and the government, "he said.

According to Prof. Dr. Arif Satria as Chancellor of IPB University, this pandemic period is a momentum to achieve food independence. This capital has been owned by our nation for a long time, but its potential has not been optimized. Local food such as sago is very potential to be developed. "Not just a seminar, from this activity is expected to emerge new ideas and new developments in the development of the sago-based food industry. This local food must adapt to the industrial revolution 4.0, not only aspects of production technology, but also connectivity. So that each actor from upstream to downstream can be connected, "said Prof. Arif Satria.

Present as a presenter were Prof. Bintoro, an expert in sago IPB University. The second speaker was Dr. Wibisono Poespitohadi, Director of the Procurement Agency for Logistics (Bulog). Then there is Dr. Iwan Nasir, the Regent of the Meranti Islands and Dr. Fakhri Karim, Director of PT Austindo Nusantara Jaya Tbk, which produces industrial-scale sago flour. The activity was guided by a moderator, Prof. Hadi Susilo Arifin from DGB IPB University.

In his presentation, Prof. Bintoro revealed that the use of sago was only ten percent even though the potential of sago was very large in Indonesia. Nowadays sago trees are very commonly found on the island of Papua as a wild tree. Besides this plant is also able to adapt well in many regions in Indonesia. If used properly, sago production can reach 100-300 million tons. Even though Indonesia's food needs are 30 million tons, we can import the rest. "Until now sago has not been widely known by the public. Though this material can be used to be a lot of benefits, such as sugar, the food and beverage industry, ethanol fuel can even make plastic. Some of the menus that we have developed are sago noodles, sago sugar and various cakes, "added the IPB University lecturer from the Department of Agronomy and Horticulture.

Meanwhile Dr Wibisono explained that Bulog could also help develop the distribution of sago commodities. According to him, the Bulog warehouse is not only for storing rice and corn, but also has the function of storing other foodstuffs, specifically storing staples. This was responded by the Regent of Meranti Regency, Dr. Iwan Nasir, so that the National Logistics Agency could help the distribution and market of sago which had been difficult in the area.

In line with the previous speaker, Dr. Fakhri Karim said that the sago industry was still very difficult, due to the lack of government support. There must be a grand design development and sago industry policy so that products can compete in the community. According to him, a holistic solution to the distribution problem is very expensive, permits are still difficult, and there is a lack of coordination between the central and regional governments. (IAAS / NAS)