Vice Minister of Agriculture, Nature, and Food Quality of the Kingdom of the Netherlands’ Royal Visit and “College Tour” Talkshow to IPB University 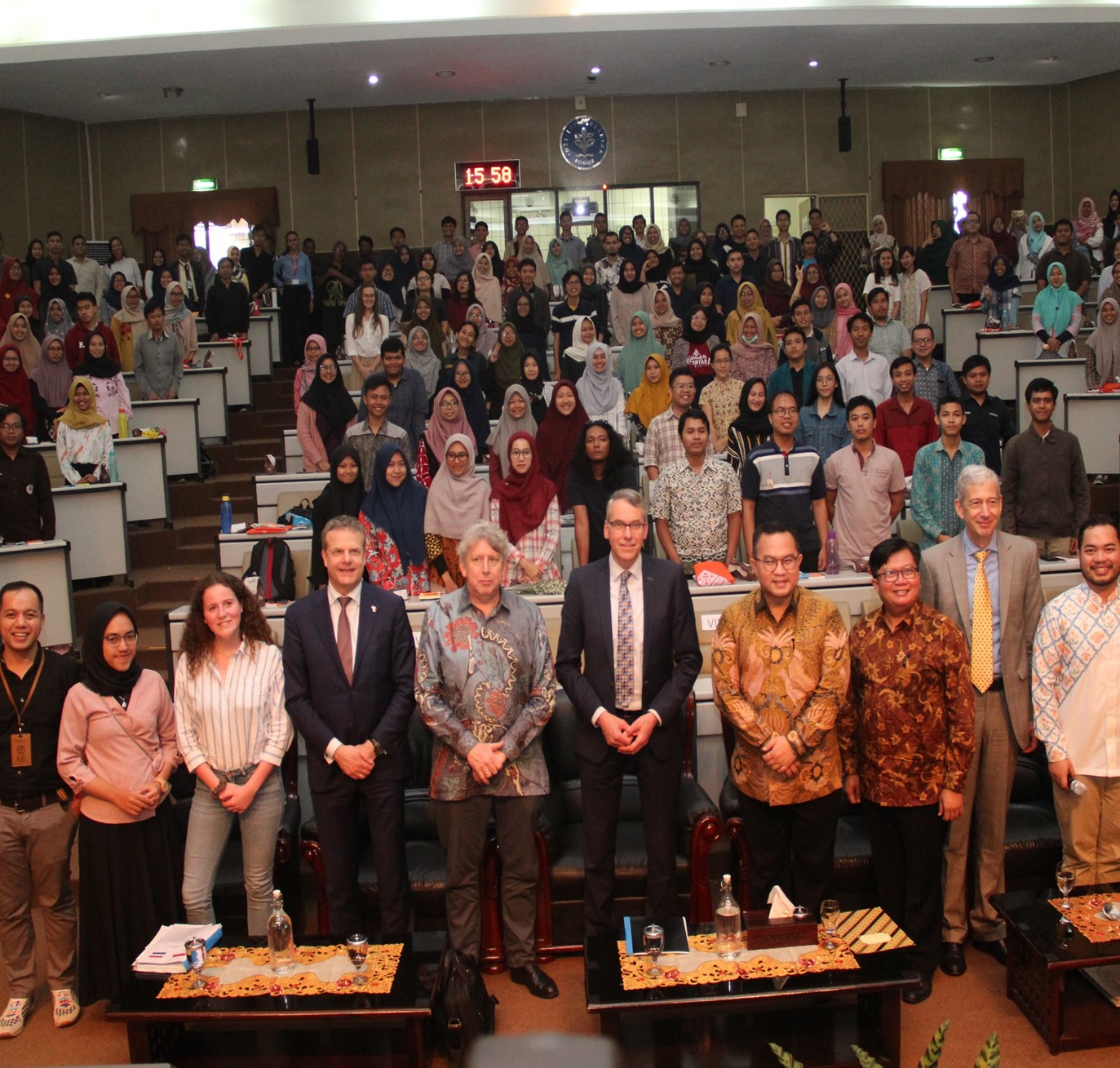 IPB University welcomes an official visit from the Vice Minister of Agriculture, Nature and Food Quality from the Netherlands on March 11th, 2020. at IPB Dramaga Campus, Bogor. In this visit, the vice minister was shown around the Agribusiness and Technology Park (ATP) and engaged in tree planting activities around the Common Class Room (CCR) of IPB University.

In this visit, IPB University’s rector, Prof Dr Arif Satria described the Agromaritime Strategic Plan to promote transdisciplinary research. As a higher education institution concentrated in research, IPB University has at least 24 research centers focused on food, energy, environment, poverty eradication, and biomedicine. All these fields are included in the Agromaritime 4.0 Strategic Plan. He explained that Agromaritime 4.0 includes agriculture, fisheries, and bioscience. The concept implements internet of things (IoT) in creating precise agromaritime resource. The technology needed in this concept are, among others: artificial intelligence, drones, robotics, block-chains, genetic engineering, and nanotechnology. The application of this concept is hoped to increase quality, value, participation, competition, and multifunction of agriculture products.

Currently, IPB University has multiple ongoing partnerships with the Netherlands. A few examples of those partner projects include the INREF-Smart-In-Ag, Forensic Tracing of Tropical Timber in Indonesia, Vocational Education Training (VET), and the Resilience of the Richest Reef. The newest collaboration project is the Smart Indonesian Agriculture-Development Logistic and Evaluation for Animal Protein Production (INREF-Smart-in-Ag). This project will be officially run by both IPB University and the government of Netherlands in the coming April 2020. The visit from Mr Jan-Kees Goet and company from the Ministry of Agriculture, Nature, and Food Quality of the Netherlands was made in order to develop a partnership for the betterment of agriculture development in Indonesia. The visit was made possible as part of the Netherlands’ King and Queen royal visit event to Indonesia.

During the “College Tour” talkshow (as part of The 45th IPB Talk on Complexity and Sustainability Sciences), Mr Jan Kees spoke in front of approximately 300 attendees at Andi Hakim Nasoetion Auditorium, IPB Dramaga Campus, saying that the Netherlands is a small country with a small area of land, however they are able to produce an abundance of high quality agriculture products. He mentioned that many countries, including the Netherlands and Indonesia, are facing the issue of food availability. With the growth of human population reaching nine billion people in the coming year of 2045, food security has become an important issue for all countries in the world. In this opportunity, Mr Jan-Kees revealed the success of the Netherland in managing agriculture. Agriculture management in the Netherland is done in integration of the government, farmers, and businesses. It is called the agricultural triangle. The government’s role in this triangle is in regulation, where the farmers play as the main players, and businesses as a link for farmers to channel their agricultural products to the consumers.

Regarding the issue of food waste and food loss, Mr Jan-Kees expressed that these are important issues which must be recognized by the world. To decrease food waste and loss, efforts must be made to transform leftover food into energy or other forms that are useful for the environment. Not only that, different parties must also be involved so that consumers and customers understand the importance of food for people all over the world. Mr Jan-Kees also explained that two other important issues the world is facing are the conversion of agricultural land to industries and the lack of farmer regeneration. The Netherlands’ government has created new innovations to combat this problem in the form of landscapes used for modern and precise farming. While for the issue of regeneration, the government is making efforts to introduce agricultural innovations to the younger generation in order to pique their interests in agriculture. The government also plays a big role in regulating agricultural practices for sustainability of agriculture in the Netherlands. He spoke out to the young generation, inviting them to work together in developing agriculture and reaching the Sustainable Development Goals (SDGs) of zero hunger. He believes that by putting to use innovations in the field of agriculture, the dream can be reached, because one of the keys to success is by taking advantage of innovations.