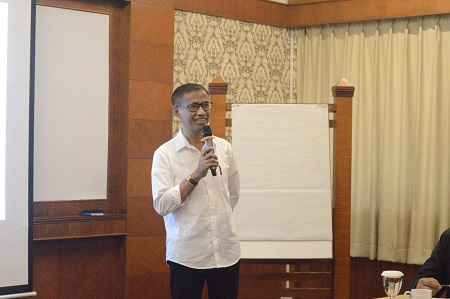 IPB University holds its mid-term exams (UTS) online since the 23rd of March, 2020. The Director of Informatic Systems and Digital Transformation (DSITD). Ir Julio Adi Santoso, MKom explains that there has been 14.935 students and participants taking part in this mid-term exams. Around 12.150 students uses IPB University’s systems while the rest uses other platforms.

Meanwhile, the highest spread of participants accessing were from Java, followed by Sumatra and Sulawesi. Other islands pale in comparison

“In the execution of online mid-terms, a lot of preparations have been done. Among those are infrastructure preparation through the upgraded capacity in the system, server and network. Especially those who use LMS IPB, were provided 7 servers with the same specs. Other than that, there are content preparations including the overall packaging of test questions and practice tests,” he said.

The actual implementation had a problem on the morning of the first day, the system overloaded. Though it was easily addressed by adding the capacity to allow 2000 participants to access a server at any given time.

“the second problem, the network in the participant’s point of acess is sometimes unreliable. For this there will be mechanisms implemented by the Directorate of Student Administration and Admission (DAPPMB),” he adds.

Regarding whether the online testing system will be used even though there has been no declaration of emergencies from the Ministry of Education and Culture (Mendikbud) on Kampus Merdeka, Julio conveyed that such a stance is right and will be continues. “Of course with preparations and better supporting mechanisms. “ he explains.

The online testing systems have been proven to be effective due to the lack of rooms and supervisors needed in every room, plus its paperless. The execution of online testing surely needs improvements overall, from infrastructure to digital literacy from both lecturers and students. (IAAS/RCD)