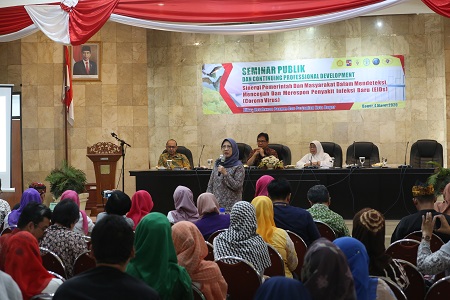 Head of Bogor City's Food and Agriculture Resilience Agency, Anas Resmana, said that this public seminar was held in an effort to anticipate as early as possible in responding to viruses that cause public concern.

"How to handle it, how the sequence so that humans or animals can be handled. This is also in an effort to be aware of bats at two points, namely in the Bogor Botanical Gardens and around Lake Situ Gede, "he said.

This event was also carried out in an effort to provide correct information in mitigating coronavirus-related diseases. In addition, the city of Bogor, which is located close to the city of Depok and a city that is capable of supporting the Presidential Palace, is certainly a serious concern of the importance of all elements of society working together to realize One Health

In his presentation, Dr. drh Joko Pamungkas, MSc, Senior Researcher of Primate Animal Study Center (PSSP), Institute for Research and Community Service (LPPM) IPB University said that one form of mitigation in anticipating the emergence of New Infection Disease / PIB or Emerging Infectious Disease / EID is surveillance on wildlife. The lecturer at the Faculty of Veterinary Medicine of IPB University said that coronavirus is one of the viruses found in bats in Indonesia according to the results of PREDICT-Indonesia surveillance from 2009 to 2014. From the surveillance results in several locations in Sulawesi, it was found six types of viruses that infect humans and five types infecting wildlife including coronaviruses.

In theory, humans and animals that act as hosts can be infected by pathogens. There is a dangerous viral infection in humans, after research it turns out that the ancestral virus came from wild animals that act as natural hosts and do not arise. Various triggers that cause increased interaction between wildlife and humans include the density of human and wildlife populations, the potential transmission of pathogens from wildlife to humans is triggered due to changes in forest function resulting in reduced wildlife habitat so that it encroaches on human settlements.

"Some PIB / EID always occur first in humans. As stated by Prof. Jonna Mazet, epidemiologist and Director of PREDICT-Global that she is more worried that we will behave as usual before. That is waiting for the emergence of PIB in humans, why not anticipated so that it can be predicted, "he said.

Dr Joko said based on the results of the overall PREDICT-Global surveillance, there were 931 new viruses identified. And actually the virus that causes Covid-19 (referred to as SARS-CoV-2) had been predicted beforehand by the findings of the PREDICT-China team.

According to him at this time PSSP together with the Eijkman Molecular Biology Institute (LBME) Jakarta became one of PREDICT-Global partners which involved around 35 countries in Africa and Asia. PREDICT, funded by USAID, is an international collaboration to detect or map viruses circulating in wildlife, especially in bats, rodents and primates.

Meanwhile, on this occasion Dr. Drh Diah Iskandriati, PSSP IPB University Senior Researcher explained about "How to Live Safely Side by Side with Bats". According to him, although bats are virus-carrying animals, they provide many benefits or advantages for humans compared to their disadvantages.

Bats function to sow the seeds of plants, in addition to that bats also eat insects that become pests of plants. Aside from being a pollinator of more than 300 types of fruit-producing plants, Dr. Diah said that the United States government felt benefited by the existence of bats because it saves tremendous costs for its food crops as a result of the many pests of agricultural pests eaten by bats.

"Interrupting the bats will eventually bring their interactions closer to humans. The activity of capturing, hunting, collecting and processing for food will increase the risk of exposure to pathogenic agents. For this reason, it is hoped that the community will not disturb their populations, as well as their habitat, "he said.

Besides Dr. Joko and Dr. Diah, also present was Dr. Oki Kurniawan from the Health Service who provided materials related to prevention and responding to Corona Virus PIB and Dr. Dikky Indrawan from IPB University's School of Business spoke about social and economic aspects of bats.

Attending the event were Drh Narti Daroendio from the Indonesian Veterinary Association (PDHI) Branch of West Java-2, Drh Sudjatmiko from the Center for Public Health and Veterinary Research, as well as around 100 participants from various backgrounds, across sectors and representing community elements. (IAAS / NAS)