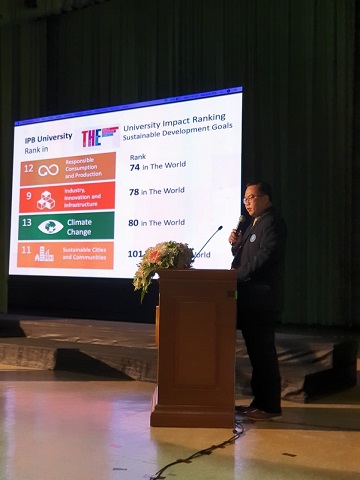 IPB University’s Rector, Prof. Dr. Arif Satria, was presented with the honor of giving a speech at the 77th Anniversary of Kasetsart University, one of the most prestigious universities in Thailand, on February 3rd, 2020, in Bangkok.

Prof. Arif reminded the audience of challenges we currently face, some of which includes climate change, food sustainability, and the gap between quality of life from different nations. The rapidly inclining rate of economic growth has contributed in the decline of ecosystem quality. This causes low availability in land and environment for production or for other purposes, which in turn results in lower quality of lives.

He continued to explain that the Sustainable Development Goals (SDGs) is to be used as a global platform in the creation of a better world for humans. He also highlighted the important role of universities in networking aspect for the achievement of SDGs. IPB University has been actively undertaking SDGs actions within the campus’ activities and values, evidenced by several SDGs related accomplishments granted. Ones of which are 2019 World’s Top 80 THE Impact in 3 SDG pillars:  SDG#12 Responsible Consumption and Production (#74), SDG #9 Industry, Innovation and Infrastructure (#78) & SDG#13 Climate Action (#80); Top 200 in 2 pillars: SDG#5 Gender Equality (#101-200) & SDG#11 Sustainable Cities & Communities (#101-200); and Top 301+ in SDG#17 Partnerships for The Goals. Meanwhile, UI GreenMetric (prestigious ranking board on universities that performed remarkably on carbon emission reduction and climate change action) as well named IPB University at #40 globally and #2 nationally.

Prof. Arif’s speech also covered the topic of education. He stated that education can be powerful tool to diminish poverty in reality. IPB University is committed to carry on the access given to candidate students from families in need so that in the future they may raise their families’ economic sustainability. IPB University also has a vision to create technopreneurs and sociopreneurs in a systematical way so that our graduates play an active role in creating work opportunities and in eradicating poverty.

IPB University has launched the SDGs Network in 2019 and has also made a Sustainability Report at the IPB University’s sustainability website platform. This is IPB University’s commitment to support the goal of achieving SDGs. Prof. Arif explained that the main problem from SDGs is the unbalanced dissemination of information to related parties. In reality, there are many people involved who have unconsciously performed the steps in achieving SDGs. SDGs are universal values which are desired by everyone. Through the SDGs Network, IPB University along with industries, NGOs, and private companies are networking and achieving SDGs, compiling the steps and results in a report.

Going back to the topic of the speech, Prof. Arif went on to discuss the concept of Agromaritime 4.0, along with various 4.0 innovations created by IPB University’s lecturers. These creations which were made to support the achievement of SDGs, consisted of Agriculture 4.0, maritime, social innovations, and even herbal and health products. In the food sector, the Agro-Technology Park (ATP) innovation has managed to connect farmers around campus to around 20 supermarkets around Jabodetabek (Jakarta-Bogor-Depok-Tangerang-Bekasi) metropolitan area. In the health sector, IPB University has, for 13 years, continuously produced vaccines for H5N1 and herbal products like ‘temulawak’ (Curcuma zanthorrhiza), in cooperation with local governments and private companies. Prof. Arif continued to relay the inevitable issues of food, coinciding with the growth of population. Three main issues are highlighted by the Rector: data accuracy; food lost and food waste; and farmers’ regeneration. Data accuracy is fundamental due to its function in policy making. Precise data would result in more accurate policies according to the factual reality. While food lost and waste was highlighted due to FAO’s data from 2019 which states that a third of food produced for human consumption is lost or wasted. This makes efficient farming highly importance. Precise farming is needed in combatting this problem for optimum efficiency of getting food from farm to table.

For farmers’ regeneration, Prof Arif presented data showing that the considerably old average age of farmers in many countries, such as USA (58) and Japan (67), meanwhile it is 47 in Indonesia. This phenomenon proved the point that their younger generation tend to choose other occupations besides being farmers. Therefore, new generation players must be prepped from now applying modern and latest technology to attract more young farmers to indulge in. The event was opened directly by the Acting President of Kasetsart University, Chongrak Wachrinrat, Ph.D., along with experts from multinational and prestigious universities, such as Kyoto University (Japan), Arkki Institute (Finland), European Office, Glasgow Caledonian University (England), Stockholm University (Sweden), University of British Columbia (Canada), Gwangju Institute of Science and Technology (South Korea), and University of Portsmouth (England).