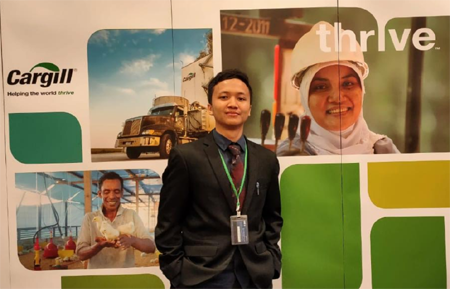 Cargill Global Scholar Program, an international scholarship program, awarded students with scholarships in recognition of their achievements and further potential contribution in advancing business, agriculture, and food sustainability. One of the purposes of this scholarship is to build a network of future global leaders who would play an important role in the fore mentioned fields.

One awardee of the scholarship is Tegar Nur Hidayat, IPB University student from Department of Mechanical and Biosystem Engineering, Faculty of Agricultural Engineering and Technology, who was part of the ERBRON-C (innovative harvesting tool for oil palm fruit) research team. Hidayat admitted that the Cargill Global Scholar Program was unique. This was because of the leadership development programs provided for awardees aside from the monetary support. The program included seminars, profession network development, and mentoring from Cargill higher-ups during the course of the scholarship term.

Awardees of the program are educated and prepared to possess global talents capable of competing with developed countries. Tegar expressed that during his term as Cargill awardee, he felt that the bond between figures in Cargill and scholars were highly appreciated and nurtured. This was proved by the In Country seminar he went through where he truly felt the warm and strong familial bond during six days in the first year of the term. He further explained that scholars were educated to uphold high values according to Pancasila, to be competitive, and to orient themselves as professional leaders with high integrity.

The previous year, Tegar succeeded in achieving the “Superior Academic Achievement and Leadership” from Cargill Scholarship, which was a prestigious international award. Tegar relayed that he had learnt a lot during his term as a Cargill Scholarship Awardee. Some of the lessons he learnt was the practice of an authentic leadership style. Tegar mentioned his view on leadership, saying that leaders must be authentic. This means that each individual has different backgrounds, characters, and personalities. Tegar acknowledges authenticity and integrity to be the two characteristics of a good leader. From the scholarship program, Tegar also learnt about teamwork. For him, learning about teamwork is highly important, especially since the influence a leader has on other people is one of the defining traits of a great leader, in his opinion. The third leadership lesson which he took from the program was about the importance being a good listener. He explained that this ability would be crucial in determining our position in the society, as well as our place in the professional network where scientific and technological developments are in progress for both specific issues and in the advancement of Indonesia’s agricultural field.