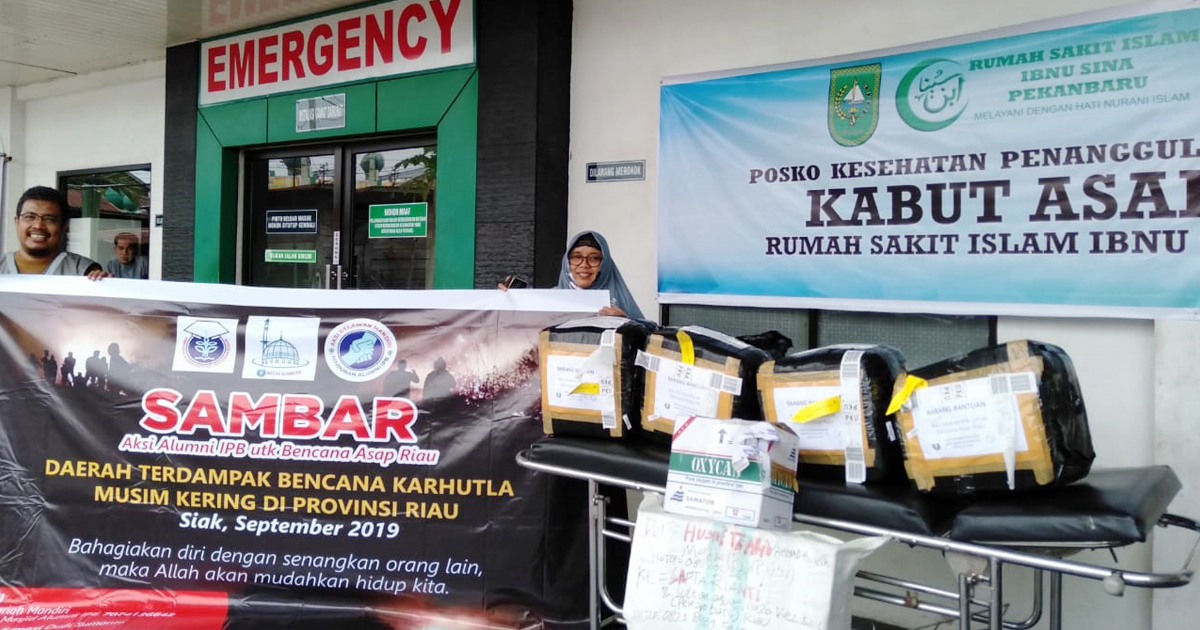 Alumni Association (HA) IPB University, through an autonomous body Independent Volunteers Action (ARM) donates logistics in the form of 2000 N95-standard masks, 100 portable oxygen tanks, and various drugs to help people in Riau, which is in a middle of smoke disaster due to forest fires. The donation was distributed to the locals, especially in Pelalawan Regency and Pekanbaru City, which is struck most severely by the smoke disaster. The program named SAMBAR (IPB Alumni Action for Riau Smoke Disaster) is held in partnership with Mosque Welfare Body (DKM) of IPB University Alumni Mosque, Bogor, and Ibnu Sina Hospital (RSIS) Pekanbaru.

This action, Fathan continued, is in line with one of HA IPB University’s missions, which is to increase the role, contribution, and empowerment of IPB University Alumni for the good of the nation.

RSIS gladly welcomed the donation, due to the difficulty in treating highly increasing patients. “Since the last week RSIS noted that the amount of people getting treatment in RSIS varied between 20 to 40 patients per day,” explained dr Amiral Amra, SpB, Tuesday (24/9) in Pekanbaru.

The health problem mostly suffered by the people was upper respiratory infection. Riau is one of the provinces most severely struck by the disaster, with the rest of them being Jambi, South Sumatra, West Kalimantan, Central Kalimantan, and East Kalimantan.

ARM is a humanity autonomous body of HA IPB University, whose formation is established in their second national meeting last February. ARM aims to alleviate the suffering of disaster natural and technology disaster, health and humanity crises in this country, through the active contribution from IPB University alumni. (Ard)