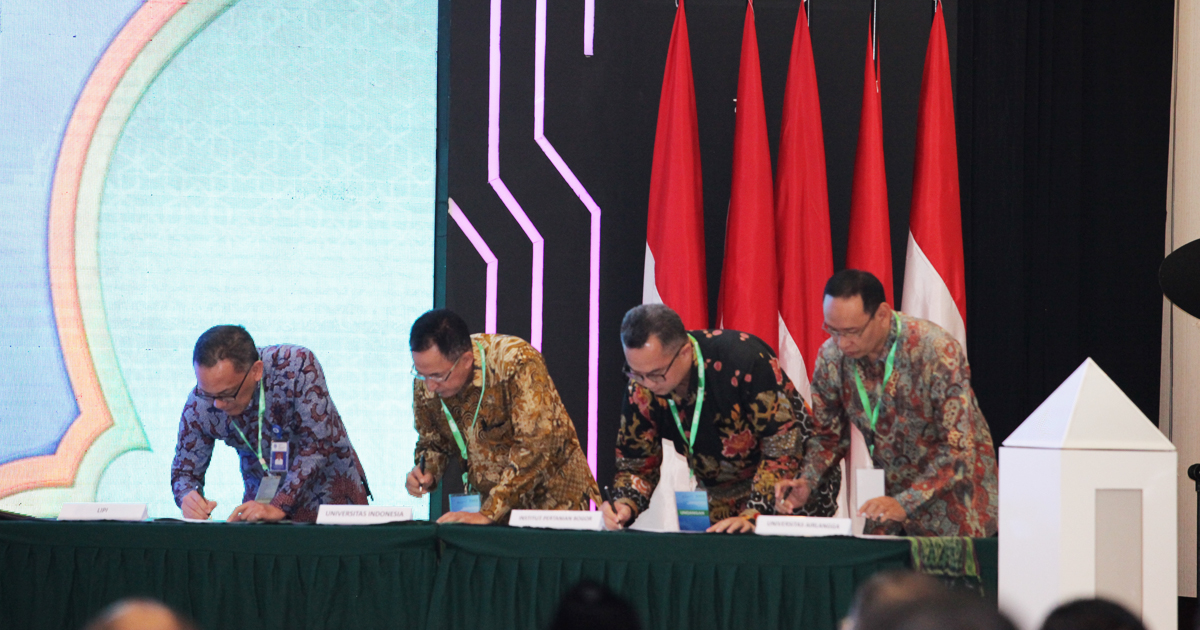 IPB University and the National Islamic Finance Committee (KNKS) agreed to sign a memorandum of understanding (MoU) which coincides with the launch of the Indonesian Sharia Economics Masterplan (MEKSI), Tuesday (14/5) in Jakarta. This MoU was signed by the Chancellor of IPB, Dr. Arif Satria and Executive Director of KNKS, Ventje Rahardjo Soedigno, S.E., M.Ec. Also attending the signing ceremony were the Dean of the Faculty of Economics and Management (FEM) of IPB, Dr. Nunung Nuryartono.

Dr. Asep Nurhalim, Chair of the Department of Sharia Economics of IPB who also attended the launch of the MEKSI said that in this MoU, there are at least two core things in the collaboration between IPB and KNKS. First, the formulation of a sharia economic curriculum, which can later be used as a joint guideline for every university in Indonesia that has a sharia economic department, study program, or concentration.

"We were chosen to be one of seven universities in Indonesia to cooperate with KNKS in developing sharia economics. IPB will be part of the formulation team to improve the national sharia economic curriculum," he said.

Furthermore, Dr. Asep explained, "People have often thought that waqf is only for cemeteries and mosques, whereas waqf is as broad as the existing real sector. Waqf in forestry, agriculture, animal husbandry and fisheries can be instruments to improve community's welfare. This is what we will try to do in the collaboration with KNKS."

Meanwhile, Executive Director of the KNKS, Vetje Rahadjo said that basically the Indonesian Sharia Economics Masterplan 2019-2024 recommends four main steps and strategies. The first step is halal value chain strengthening by focusing on sectors that are considered potential and highly competitive. The second one is to strengthen the sharia financial sector with a master plan that has been outlined previously in the Indonesian Sharia Financial Architecture Masterplan (AKSI Masterplan). The third one is to strengthen the small and medium micro business sectors as the main driver of the halal chain. And the fourth is to strengthen the digital economy, especially in terms of trade or e-commerce and marketplace. (Rz/ris/zsp)