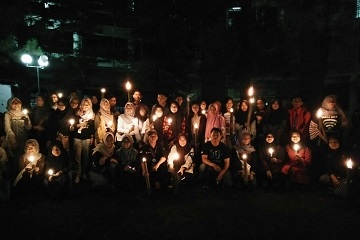 Global Warming is a phenomenon that has now become a problem and concern of the world community. Various activities began to be intensified in order to combat Global Warming. As was done by the Indonesia Green Action Forum (IGAF) Student Committee Local Committee of the Bogor Agricultural Institute (IPB LC). In collaboration with Earth Hour Bogor, IGAF held a Road Hour Switch Off Earth Hour 2019 (29/03) event at the Soekarno Plaza, Faculty of Agriculture, IPB. Earth Hour Bogor is an environmentally caring community domiciled in Bogor and under the auspices of the World Wide Fund for Nature (WWF).

In his speech, Sophia Anjani as the Chair of ISEW said that the Switch Off event was held regularly every year. "This year there is something different, there is cooperation with the dormitory of the General Competence Preparation Program (PPKU) by conducting a power outage from 20:30 to 21:00," said this 53rd batch of IPB students.

The main agenda of the Switch Off event is to make lights out simultaneously at the Faperta corridor, IPB, to the PPKU IPB dormitory at 20.30 until 21.00. Participants in the event were invited to go around the IPB campus with an arranged route and carry a torch and invited the IPB community to move around to save energy.

"Switch Off is a symbolic activity for saving energy in the world. Bogor itself is one of 30 cities in Indonesia that participated in this movement,” said Hendra, a member of the Earth Hour Bogor community in delivering the material.

Hendra added that the Switch Off activity was a movement that departed from the anxiety of the people of Australia or Sydney precisely, for the climate change that occurred in the world. For this anxiety, they made a simple and easy energy-saving movement, namely the outage of lights. Switch Off activities are always held in the last week of March. This time was chosen because at that time it was estimated that the earth's temperature was in the normal stage, so that it was the right time to save energy.

"This activity in order to help convey to the citizens of IPB and Bogor of course that climate change is not a figment. Besides that, energy saving activities are expected not only to be carried out during Earth Hour, but also in the following days," Hendra said.