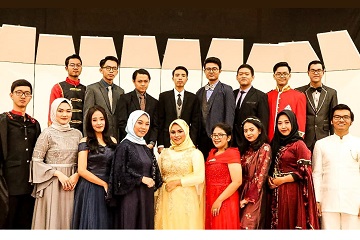 As part of the Choralescence Annual Concert program series, Agria Swara Student Choir (PSM) of IPB University held the Vocal Solo Recital Concert, at the Mandiri Auditorium, Dramaga Campus, Bogor (3/3). This concert was a place to hone skills in terms of singing techniques and self-confidence for members of the Agria Swara PSM to be more solid and independent.

"Through solo singing, each singer finally realized their strengths and weaknesses as a self-evaluation. The concert entitled "Relief: Carving Hope in Tone" featured 17 singers (IPB students from 16th and 17th grades) who performed songs from a variety of languages. The singer costumes were also interesting according to the characters of the songs performed by each singer," said Chairman of Agria Swara PSM, Marcella Audella Rosari.

The songs performed were from well-known composers such as W.A. Mozart, Giovanni Legrenzi, Antonio Caldara, Franz Schubert and others. There were two performance sessions and a special performance from "Akang Teteh Voice", a senior singer at Agria Swara PSM.

In addition to the song Ave Maria by Franz Schubert, this concert also presented more rhythmic songs such as a song called "Sebben Crudele" by Antonio Caldara. This song tells about the cruel love but with sincerity, he hopes that his lover will melt to him. The concert ended with a song titled "La Donna e Mobile" which tells about women who always change their attitudes towards men.