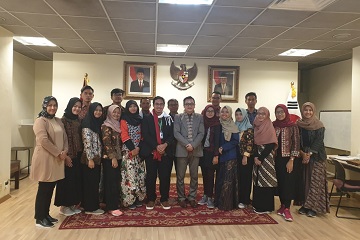 Scholarship Beneficiaries Aktivis Nusantara IPB Univeristy initiated the Youth for Movement (Y4M) from 16-19 February 2019 to North Korea. Y4M is an activity where the participants consist of the best students in various universities including IPB, UGM, Airlangga University, UPI, Widyatama University, and ITS.

"The Youth for Movement in the previous year was carried out in three countries, namely Malaysia, Thailand and Singapore. Then it is currently held in South Korea (Winter in Korea) with the theme ‘Building up Youth Capacity for Empowering Leadership Community Based on Creative Economy ‘. The Y4M program is intended to provide training, strengthening, and guidance for Indonesian activists with various competency improvement programs, adding national and international networks, negotiation and advocacy, and strategic roles of Indonesian youth to become agents of change, reserves the leadership of the future (iron stock), and (agent of social control)," said Aktivis Nusantara Scholarship Manager, Ach Firman Wahyudi, SE, M.Sc.

This activity begins with the obligation to attend the Korea Y4M-ASEAN Youth Network Conference at the ASEAN Korea Center Hall, Seoul City Hall, South Korea. In this session it was intended that Indonesian youth can compare Indonesia and Korea and ASEAN countries regarding education, rural development and the creative economy. The comparison is expected to provide enlightenment to provide solutions to problems in Indonesia from solutions that have been successfully implemented in ASEAN/Korea countries.

The session was attended by the Vice President of the ASEAN Youth Network Korea (AYNK) and delegates from the Philippines-Laos-Vietnam and participated by Indonesian students. The Vice President of AYNK, Ms. Hongsanass also introduced the organization and programs that had been carried out. Next, Mr. Alif gave a speech as well as introducing the profile of Baktinusa and Youth for Movement Indonesia. After that, the delegates made presentations per group regarding the comparison of Indonesia and Korea.

Then the Y4M participants visited the Korea Mosque Ansan. During this visit discussions were held with Indonesian migrant workers in Ansan City at the Sirathal Mustaqim Mosque in Ansan district, South Korea. This session is intended for Indonesian youth to be able to know the struggles of Indonesian migrant workers in working and worshiping in Islam. In addition, it is intended that Indonesian youth can find out the infrastructure for Muslim worship in South Korea.

Toni, Chairperson of Ansan Mosque Youth, explained how workers from Indonesia adapted in terms of the difficulty of access and permission to pray, get halal food, and the high pressure in managing higher education. Then, a visit was also made to the Korea Muslim Federation. In this session discussions with the Korean High Priest of the Moslem Federation (KMF) were held at the Korea Moslim Federation Conference room, Itaewon Masjid, Seoul Central Masjid, South Korea. This activity was carried out so that Indonesian youth learned about the struggles and roles of KMF in Korea. Besides KMF as a halal certification issuing institution amidst the difficulties of halal food in Korea, young people are expected to burn their spirits to spread goodness.