IPB Signed MoU with the West Nias Regency and Belitung 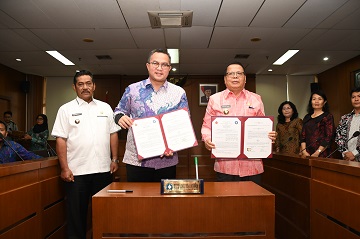 The scope of the MoU covers cooperation in the fields of education, research and community services, as well as the development and use of science and technology. With the signing of the cooperation agreement between IPB and West Nias and Belitung, it is expected to expand the range of contributions IPB for areas in Indonesia.

The Rector hopes that in the future more and more students are continuing their education in IPB from Belitung and West Nias, in the level of undergraduate until the doctoral program.
"There have been many innovations by IPB which have been marketed in the community. Belitung has a nice natural potential. Rich in marine, fisheries and resources of tin mining. Belitung is also known for pepper. So we would expect, innovation and technology that has been generated by IPB could contribute better, "said the Rector.

Belitung regent, H. Sahani Saleh, S. Sos said Belitung regency is very happy and grateful for this cooperation. He believes that the construction and development of the area must be accompanied by academics. According to him, IPB is the right university to be able to contribute in the development process and development in Belitung Regency.

Meanwhile, West Nias Regent, Faduhusi Daeli, S.Pd said that a cooperation agreement with IPB is something that is long awaited for. Looking ahead, the Regent expects IPB could help the development of agriculture, marine and tourism in Nias.

"IPB is very enthusiastic in helping people in underdeveloped areas. With the help of IPB it will eventually pave the way of cooperation in the development of agriculture, marine and tourism in West Nias, as well as the sending of students studying at IPB, "said West Nias Regent.

MoU with the West Nias regency, will be followed by an agreement on the preparation of the master plan of the area of fisheries and marine potentials of West Nias between the Institute for Research and Community Service (LPPM) IPB with the Department of Marine and Fisheries of West Nias. (AVR)