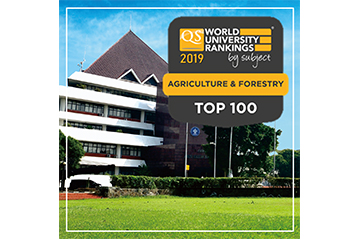 This year, Bogor Agricultural University (IPB) continued in showing its achievements as part of the world's prestigious universities. IPB succeeded in occupying the Top 100 World position based on the QS World University Ranking by Subject in 2019, precisely for the Agriculture and Forestry categories, which was only officially released on February 27th, 2019. This accomplishment reflected IPB's commitment in implementing “Indonesian tri-dharma (three duties) of higher education” [which are comprised of 1.) Education and teaching, 2) Research and development, and 3) Community service] in the field of agricultural science in a broad sense, and was achieved since 2016 then continues in 2017, 2018 and 2019. QS World University Ranking by Subject issues a list of best universities in the world by category of disciplines/majors. To conduct the ranking, this English education research institute evaluates 4,500 universities in the world in 48 scientific fields. Based on the ranking results, IPB is in the same group (#51-100) with Yale University (U.S.A), Sydney University (Australia), Universiti Putra Malaysia (Malaysia), Hokkaido University (Japan) and several other well-known universities. Whereas in Indonesia, only two universities were included in the ranking in this category, namely IPB in the first place and Gadjah Mada University in the second place (#151-200). Previously, in December 2018, IPB also was positioned at Top 40 of the Most Sustainable University in the World and ranked 2 in the Indonesian version of the UI Green Metric. In addition, IPB also received the National Rank 1 Widyapadhi Award 2018 as the most innovative campus. The award was given for the efforts of IPB in developing innovation and the commercialization of their products. In 2018, IPB also recorded 43 innovations in the list of 100 most prospective innovations in Indonesia. Not only achieving recognitions in the field of agriculture and innovation, IPB was also awarded as the Most Informative public university during Public Information Openness Award 2018 from Indonesian Central Information Commission. IPB is also ranked 3rd nationally at non-vocational public universities clustering given by the Ministry of Research, Technology and Higher Education of Republic of Indonesia 2018. These mentioned achievements confirm IPB's dedication in delivering topmost contributions to the society.