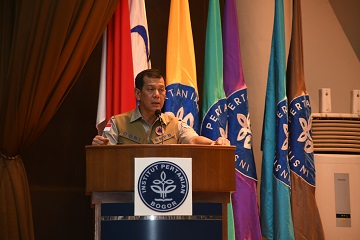 "Natural disasters should be both a lesson and teachers that are valuable to us and the government. For this reason, efforts to minimize casualties are very important. Anticipation steps need to be prepared in advance so that when natural disasters occur, the community is ready to save themselves," said Head of the National Disaster Management Agency (BNPB), TNI Lieutenant General Doni Monardo while giving a public lecture at IPB University, in Dramaga Campus, Bogor (19/3). On the same occasion, a Memorandum of Understanding (MoU) was signed between IPB and BNPB, Majalengka University, Kuningan University, Jember State Polytechnic and West Java Scouts Regional Quartir.

He said the disaster continued to come on the beloved earth, we were shocked by the flash flood in Sentani which claimed more than 70 lives. Likewise, several other regions have experienced the same things such as in Merauke, Yogyakarta, and aftershocks in Lombok. The number of disasters and their losses, it is necessary to have a synergic effort to anticipate natural disasters in the region (coastal city warning).

"Residents in the disaster area also need to be given disaster education from the start. The government and universities must be able to change the mindset of the community to protect the environment, forests, and rivers. The amount of waste in the rivers results in very dangerous fishes contaminated with mercury. The trees in the forest do not continue to be cut down because the forest can absorb water and can overcome floods and tsunami. For this reason, the community is given an understanding of the importance of safeguarding it all, they must also be trained to know what is done when a disaster comes. Students need to be trained to look for shelter such as sheltering under a table if they don't have time to empty the building. Those who work in high-rise buildings must be trained to vacate buildings quickly and precisely if there is an alarm regarding disasters.

While the Rector of IPB, Dr. Arif Satria said that now is a collaboration era or a mutually complementary era in supporting needs. For this reason, IPB carried out a memorandum of understanding as a beginning to improve cooperation with several universities, BNPB and the West Java Scouts Regional Quartir.

"In this era of collaboration, we cannot do something only by ourselves anymore. The ability to collaborate is now an ability in the future because the required skills or competencies needed in the present era include collaboration skills, communication skills, and creative abilities. Related to disasters that often affect the Indonesian homeland, natural disasters can occur due to natural factors and can occur due to human activities. Humans themselves cause the disaster itself. For the duty of all stakeholders, both the government and universities to provide continuous direction to the public about the importance of protecting nature," said the Rector.

The Rector added that the community must have knowledge and skills in dealing with disasters. With the hope that preparedness can be useful in determining the right steps in anticipating and minimizing the loss of lives. All can be done with regular and continuous simulations of disaster management exercises. (RYS)