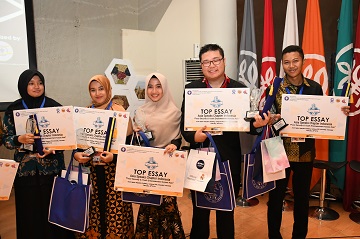 The event was attended by the Vice Rector for Cooperative Education and Information Systems, Prof. Dr. Ir. Dodik Ridho Nurrochmat, M.Sc.F, Secretary General of the Asian Youth Council (AYC) and the Director of the International Youth Center (IYC), Dr. Maliki Bin Mohammed Mohammed Rapiee, Dean of the Faculty of Economics and Management of IPB, Dr. Ir. Nunung Nuryartono, M.Si, and was also attended by students from various countries in ASEAN whose essays were chosen as the 15 best essays in the competition.

In his speech Prof. Dodik Nurrochmat conveyed an important message to our young people that producing food for the world is a very big task. Coupled with the increasingly rapid population growth, it makes this food problem must be faced with more seriously.

"In developing countries, the problem of food is also a complicated affair. It takes a mastery of science and technology to meet the food needs amid increasing the number of residents. Therefore, our goals have been described by FAO which, meaning food security is a life free from hunger and fear of starvation, "said Prof. Dodik.

"Re-branding done by IPB and UPM aims to explain that farming is not just a matter of planting and harvesting. Farms also need other science fields to support the great mission of the agriculture sector to achieve food security. IPB and UPM has taken the role, and now we need you young people, with a variety of ideas to open the eyes of the world that agriculture is more than just growing plants, "he said.

Meanwhile, Dr. Maliki Mohammed bin Mohammed Rapiee also explain the importance of young people to express their voice. He said the number of people in Asia totaled more than 4.5 billion people. The Asian continent has the largest population in the world.

"It also means that we are the largest consumer of the world's food. Data show that in 2016 there were 80 million people in the world who suffer from hunger. However, in 2017 this number rose sharply to 120 million people suffering from hunger. It is caused by war, uneven food distribution as well as the actions of the stockpiling of foodstuffs (speculators) that occurred in various parts of the world. Therefore, the youth should express attention on food security issues. Start with a small step, to a bigger step in the future," said the Secretary General of the Asian Youth Council.

During the occasion, the 10 best essays which were selected were presented from all the countries of ASEAN and three of them are delegates of IPB. (AVR)