The Strategy of SV-IPB in Prevention of Students' Deviant Behavior 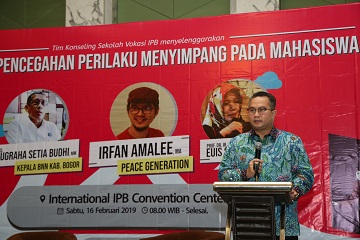 Deviant behavior in the world of education is like an iceberg phenomenon. If it is not immediately handled seriously, it will harm and create an environment that is not conducive. For this reason, the academics need to play an active role in preventing deviant behavior from students. This was conveyed in remarks by the Chair of the Vocational School Guidance and Counseling Team (SV) of IPB University, drh. Henny Endah A, MSc., As the organizer of the National Seminar on Prevention of Deviant Behavior in Students (16/2) at IPB International Convention Center (IICC), Bogor.

The event was attended by 110 participants including members of the Guidance and Counseling Team of IPB Vocational School, IPB Counselors, students, lecturers, and other invited guests. In this seminar, present as speakers were Prof. Euis Sunarti, Professor of IPB who is also a Family Activist (Giga), Drs. Nugraha Setia Budhi as the Head of the Bogor Regency National Narcotics Agency (BNN), and Irfan Amalee, MA representing Peace Generation Consultants.

Dean of the Vocational School of IPB, Dr. Ir. Arief Darjanto, M.Ec said that this activity was a concrete step in the follow-up of the IPB Chancellor's program to prevent deviant behavior in students so that counselors could identify as early as possible and prioritize preventive actions in addressing this problem. According to him, deviant behavior is categorized in three topics, namely sexual deviation (Lesbian, Gay, Bisexual and Transgender / LGBT), drug abuse and radicalism.

A similar statement was reaffirmed by the Chancellor of IPB, Dr. Arif Satria in his speech stated that IPB's attitude was very clear towards deviant behavior because IPB was responsible for maintaining the mandate of parents in producing graduates who had three pillars, namely character, soft skills and skills that were balanced with the same proportion.

"Guidance and Counseling (BK) has a big role in maintaining and strengthening character because it keeps morality very important because this will strengthen the character," he said.

According to him, guidance and counseling is a matter of communication. The most important ability in counseling is listening ability. Furthermore, he explained the role of IPB was very large in preventing sexual deviations, for example in the context of food by continuing to encourage organic food. "Pesticide residues that are still often attached to vegetables can have an impact on eroding one's masculinity. Therefore, solving this problem must be done systemically, comprehensively and holistically, "he added.

In the material presentation session, Prof. Euis Sunarti stated that this activity was a highly anticipated moment for two years to convey the magnitude, identification and early handling of LGBT phenomena to counselors regarding deviant behavior. "There is a need for help, support for those who are trapped in deviant behavior who do not know where to go and ask who, so that when there are parties that have a bad influence, this deviation will be even farther even coming out and willing to become LGBT," he .

According to him, one theory that can be applied in the guidance and counseling of deviant actors is to do neuro plasticity therapy where the capacity of the human brain can change after being stimulated with various positive things continuously so that at one point homo actors can be cured. This is the result of research conducted by American psychologists on 200 homo people who can be cured.

"So hurry up, because this time is very valuable to them and we determine whether we can save quickly or not. Dormitory facilities need to be reviewed which need to be revisited because in one room inhabited by 4 people is very worrying. Basically the point is prevention, "he stressed.

To follow up on this activity, the committee will re-socialize prevention of deviant behavior towards all IPB Vocational School students in counseling safari activities which are planned to be held in February / March. (YDI / Zul)