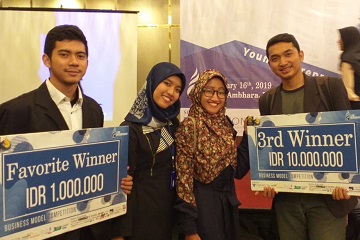 Unemployment is one of the problems that exist in Indonesia. Three students of the IPB University (IPB), Majid Muhammad Firman Siregar, Almas Quratu'ayuni, and Mohammad Ghifari Haekal create the idea in the form of a business idea that is expected to help reduce unemployment in Indonesia. The idea that they express succeeded in making them win Third Place in the arena at the same time also as the Most Favorable Winner of The 8th UI Studentpreneurs held by Student Executive Board of the Faculty of Economics and Business, University of Indonesia (UI FEB BEM), (16/2).

"When making the presentation, one of the things that I put in the background is about my experience during my Field Study (KKN). I then became coordinator in Majalengka regency. I've traveled around to various villages and saw many villagers have not been productive and village-owned enterprises (BUMDes) is not working optimally, "said Majid.

The business idea that they presented was in the form of a start-up named Kriyaloka. Majid said that Kriyaloka was founded on a desire to resolve the problem of unemployment in rural and village communities unproductivity. When in fact in these villages are capable of producing many souvenirs.

"This Kriyaloka will act as a platform  that will empower villagers and artisans through labor-intensive craft industries. So the way we are to resolve the unemployment problem in the village is to make the community as a souvenir maker. Kriyaloka will involve BUMDes and the Institute for Research and Community Service (LPPM) from universities to empower and handicraft-making training for the villagers, "said Majid.

Souvenirs produced by the villagers will be marketed through Kriyaloka with business to business systems. This system is a system that involves the institutional sales company with other corporate institutions. Souvenir produced will be offered to businesses or institutions that need a souvenir.

"We chose this system because we want it to continue production and saw a large market share. Take for example the Wedding Organizer services company. A marriage will definitely need a souvenir. Marriages in Indonesia every year are as many as two million times, according to the Central Statistics Agency. Supposedly, every wedding invites 500 people, multiplied by two million, there are one billion souvenirs that are needed per year, "says Majid.

Majid's participation in the race The 8th UI Studentpreneurs helped get support from one member of the Alumni Association of the Bogor Agricultural Institute (IPB HA). "I happen to follow the Leader Mentoring program, IPB HA program, initiated by Mr. Jamil Azzaini. I then share the video link Kriyaloka to Mentoring Group Leader, with the intention of seeking the help of friends Mentoring Leader to see and like the video. Was responded by Mr. Jamil. He helped to spread the video Kriyaloka. We also won the title as Champion Favorite with a view of the number of like video on Youtube. I thank Mr. Jamil who have provided support, "said Majid. (AVR)