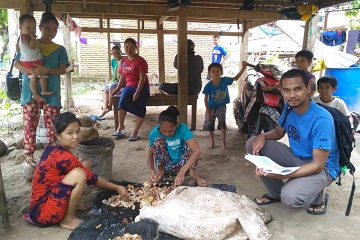 According to Dr. Muhammad Amin Rifai, Polewali Mandar is the production center of cacao in West Sulawesi with the productivity of 0,45 ton per hectare in 2015. In 2011 until 2015, the cacao productivity in Polewali Mandar suffered a decline. "The cacao production and productivity trend in Indonesia declined, both in national and regional scale. This will affect cacao farmers' income. This study aims to present the general description of carbon footprint based on household consumption of cacao farmers and the analysis of the indicators which affect the carbon footprint in Polewali Mandar," said Dr. Muhammad Amin.

Dr. Muhammad Amin Rifai said that this study is a multi-discipline study under the "Profitability and Sustainability of Cocoa in Indonesia" project, which is funded by Australia Indonesia Center in partnership with Sydney University, Hasanuddin University, and IPB.

This study comprises the production, marketing, and trade of cacao, as well as financial and health aspects of the farmers. In the study, it was found that income plays a significant role to carbon footprint produced. Fuel, lighting, and transportation are the biggest contributors of carbon footprint. Because of this, the study suggests that households need to reduce the consumption of goods or service with high emission.

"Not only that, government also has to assist people in utilizing energy efficiently, with policies that support it, and by creating more environmental-friendly renewable energy, and low-emission public transportation to achieve sustainable development. In this study it was known that the biggest carbon footprint is due to fossil fuel consumption," said Dr. Amin.

Dr. Muhammad Amin added that this study used primary data with interviews and surveys to cacao farmers household in Polewali Mandar Regency as the methods. The results show that the household expenses consist of primary needs, such as rice, grains, eggs, meat and fish. The highest consumption of farmers are fish and meat. Besides that, expenses for telecommunication and tax are the least of all. According to the calculation of carbon footprint produced by cacao farmers, light fuel consumption and transportation contribute the most to the footprint.

The expense level of cacao farmers' households is divided to five groups, from the richest to the poorest. The result shows that the higher the income, the higher the carbon footprint produced.