Towards CSV Philanthropy, Not CSR Generosity 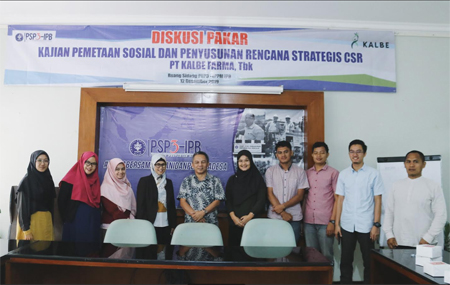 Therefore, PT Kalbio Global Medika in collaboration with PSP3 LPPM IPB University is committed to actively contribute to reducing the problem. The company, which is under the auspices of PT Kalbe Farma Tbk, is collaborating with PSP3 IPB University to solve problems and provide effective solutions.

Another ironic fact is the condition of the community which is inverse to the magnificent condition of the village office building. Another finding is that government officials who have a major role in Corporate Social Responsibility (CSR) prioritize the physical construction of government office buildings rather than the ecological and social development of the community. Whereas the company should deal directly with the community in the context of CSR so that the assistance can be more productive. The presentation of the results of the study was delivered by Dr. Dwi Retno Hapsari as the lead researcher and Zessy Ardinal Barlan, SKpm, MSi.

"Not only charity, but also by the company's philanthropic," said Ir Fredian Tonny Nasdian, MS. The senior IPB University researcher was invited to give a response in the Expert Discussion entitled "Social Mapping Study and CSR Strategic Plan of PT Kalbio Global Medika," on Thursday, December 12th, 2019, in the PSP3 Meeting Room LPPM IPB Baranangsiang.

From the results of Social Mapping and Strategic Planning (Renstra), according to Tonny it is not only limited to CSR (Corporate Social Responsibility) but also CSV (Creating Shared Value). Even though CSR will be carried out later, Tonny also offered to run the points in CSV. The CSV program offered by the Best Researcher in Law and National Economy in 1990 is an extension of corporate social responsibility or CSR.

The development of this concept is included in business strategies that emphasize the need for the problems and social needs to be included in the design of corporate strategies. Although the researchers have not found a champion figure in the village but found the fact that some religious leaders still occupy the highest position the population listens to.

The champion referred to in this case is an elected figure in the village who has the power of capital and has a direct role in increasing the productivity of citizens and enlarge the economic strength of the community. The social attitudes that are still maintained in the four hamlets of the village, that is, they still carry out community collaboration in the form of guyub or gotong royong but limited to religious celebrations or grief-related activities such as death. They haven't yet cooperated with the economy. The companies in the village have not contributed socially and economically productively, other than just distributing programs (charity) or building physical building facilities.

Previously, Dr. Sofyan Sjaf, who opened the event, emphasized that methodological innovations should be made in research. To that end, Zessy points out that in further research the Village Methodology and the Drone Participatory Mapping (Mapping) methodology will be applied, as two scientific advantages put forward by PSP3.

He also ensured that he would conduct Smart Waste Management to overcome the waste problem. The Aquaponics Program will also be conducted so that the community can increase the economic carrying capacity of their fish ponds. The program is carried out by managing the cultivation of herbal plants needed by PT Kalbio Global Medika.

With the PSP3 IPB University solution offer, it is hoped that the company's contribution can be more economically and socially active, not just providing temporary material assistance. (IAAS/YN)