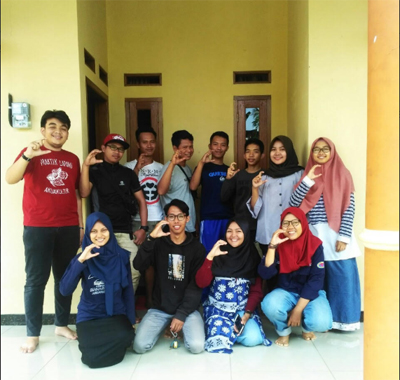 Based on the knowledge gained in classroom lectures, 15 students of the Aquaculture Student Association (Himakua), Faculty of Fisheries and Maritime Affairs (FPIK), IPB University conducted a training program for tilapia nirvana fish cultivation in Sukadamai Village, Dramaga District, Bogor Regency. This activity was part of the Village Development Grant Program (PHBD) of the Ministry of Research, Technology and Higher Education (Kemenristekdikti).

"We were given a one-year deadline from March 2018 to March 2019 to run the program. Our activity has four pillars namely nirvana tilapia hatchery for farmer groups, Teenage Farmer Groups (Karet), Women Farmer Groups (Kawat) and natural food culture," said Rafi Kemal, Chair of Aquaculture Student Association for the 2018/2019 period.

The development of the tilapia nirvana hatchery for farmer groups is the main program. During the coaching, farmers' groups in Sukadamai Village were educated a good practice of tilapia nirvana hatchery. After the seeds were successfully obtained, the seeds will be marketed to partners who have been invited to work together and the proceeds of the sale would be income for the farmer groups. Kemal and his colleagues continued to monitor and control the program of once a week.

"In this program, we help to actualize the wishes of the people, because they really want fisheries to be one of the foundations of livelihood. Usually, fishing is still just a hobby here, but it can become the main livelihood. We are here to help and educate them," said Kemal.

Kemal added that the programs were not limited only on the upstream, but also catered to the downstream sectors. Hatchery was upstream, while marketing and seed utilization were downstream. "Besides hatchery, we also have a natural feed culture program. This natural feed, aside from being used for its own sake, can be sold on the market or to other fish farmers, "said Kemal.

Another program is Karet. This program invited young people of Sukadamai Village to participate in the cultivation of ornamental fish by taking betta fish commodities. Kemal said that ornamental fish has the potential to develop in the future.

Then the other program is Kawat. Women farmers were taught to utilize seeds of nirvana tilapia that were not superior or did not pass the sorting since not all seeds produced became superior seeds.

“We think it is such a shame to see the seed goes unutilized, so we recommend the seeds to be further processed by the women farmers. The seeds can be fried and sold and became an additional income,” said Kemal.

He thought that running the program was not free of challenge. Sukadamai Village has not had an official farmers group, so it was pretty difficult to gather the farmers. Gathering data was also a challenge during Kawat and Karet programs.

“We must be able to transfer our knowledge in a simple manner, so it is easier to understand. Through the four pillars of this program, we hope that we can improve their economy,” he concluded.