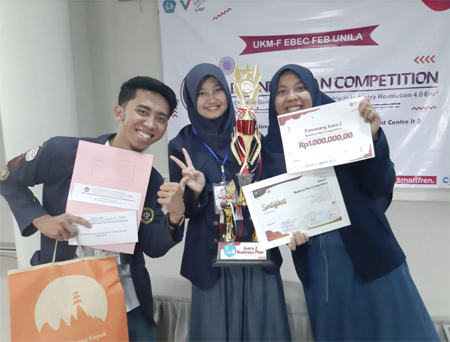 Fadillatul revealed that this idea was inspired by the many residents who took action asking for money on streets to cover the costs of building mosques in her area where she came from. This act often causes traffic jams as drivers are imposed to slow down their vehicle speed when they want to give money to those who ask for donation.

"Besides traffic jams, these acts has also caused accidents due to the lack of cautiousness in collecting the money from drivers who passes by," she explained. With that problem being mentioned, these students came up with a solution that can overcome the problem through crowdfunding which is used for fundraising from a wider community to finance certain projects. The fundraising that is rendered through this site has previously been done before, but so far it has only been limited to raising funds for victims of disasters or serious illness. This is also caused by funding destinations that are not centralized in existing crowdfunding sites. "EMaal is a special fundraising application that is expected to facilitate or support donors and recipients to work together to support the construction of mosques or prayer rooms in elusive areas. In this application we innovate new things where mosques or prayer rooms that needs financial assistance can advertise on the EMaal application, this is to make it easier for donors who want to provide assistance so that they can directly indicate to whom the assistance will be given to, " Kreshna said.

The benefits of this application are not only for donors and recipients but can also be useful for the government and the general public. The government can collect taxes from making applications and the general public can receive new jobs by becoming an employee at EMaal. Atfi added that the difference between EMaal from other applications is that this application is used specifically for the construction of mosques and prayer rooms. It is also equipped with tracking features, chat features and daily updates regarding the amount of balance that has been collected. Through this idea, Atfi together with his colleagues won the 2nd place in the Creative Generation Youthnership in Industry Revolution 4.0 Era Competition by UKM-F at the University of Lampung. "Alhamdulillah, I am thankful, I never thought I would win. We hope this application can be applied in real life, "said Atfi as the Team Leader. (IAAS/KSN)