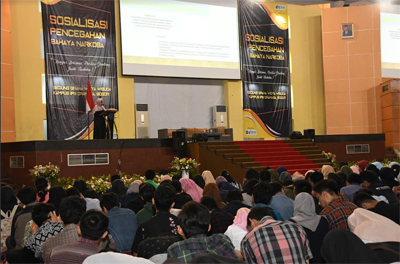 As many as 3400 IPB University students declared a "Bersinar" drug-free and clean campus on Saturday (30/11) at the Grha Widya Wisuda Building, Dramaga Campus of IPB. The "Bersinar" campus declaration is a form of IPB University's commitment in combating the dangers and distribution of drugs among students.

Meanwhile the Director of Student Affairs and Career Development, IPB University, Dr. Alim Setiawan Slamet said that the students who participated in the "Bersinar" campus declaration were students who received the Bidikmisi and Dikti Affirmations (Adik) scholarships.

"The profiles of Bidikmisi and ADik students have been seen. Their hobbies are winning championships, on average in one month there are 10 to 15 students who get champions both in reasoning and talent interests," said Dr. Alim. According to him, achievements like this really need to be maintained and must be improved. An important component in achievement is character.

"All achievements will be recognized by others if the person who has the achievement has good character. The recognition will disappear when the character is also lost, if you have lost the character then the person will lose everything," explained Dr. Alim. He revealed one of the viruses that killed performance and character was drugs. Therefore IPB University declared the campus "Bersinar" as an effort to prevent the use and distribution of drugs.

Rika Indriati R, SP MSi, Head of Section and Community Empowerment (P2M), the National Narcotics Agency of Bogor Regency appreciated the steps of IPB University in declaring the "Bersinar" campus in the City of Bogor. "I salute, just a few days ago socialized about this Bersinar campus, IPB University immediately responded quickly and today we witnessed its students have declared themselves to prevent drugs. I hope, of the 3000 students, they can convey to 3000 other students about the dangers of drugs," said Rika.

He explained, Bogor City ranks second most drug dealers and drug users in West Java Province. Based on research that has been done, what is often encountered in the field is drug users do not feel that they are taking drugs. An example is taking drugs continuously until dependence. On the other hand, there are currently many drugs that are similar to food and drinks so that it is easily accessible by the public.

"The dangers of drugs are very clear, so it is necessary to play an active role in society in preventing drug distribution and use," Rika added. He conveyed, the dangers of drugs is that it can damage the brain so that intelligence can decrease. Until now there are 2 out of 100 students using drugs or the equivalent of 2 percent. "I really hope, after this pledge, there will be no more students or students who use drugs either consciously or unconsciously," concluded Rika.

The "Bersinar" campus declaration this time was led by the Chairman of BEM KM IPB University, Bhirawa Ananditya Wicaksana and attended by all students present. (NR)