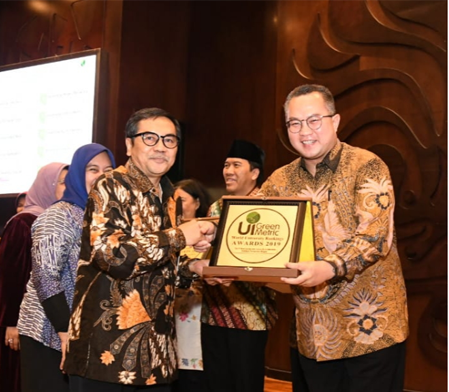 This year, IPB University has again received world recognition as an environmentally friendly campus. This award was presented at the UI GreenMetric 2019 in the University of Indonesia Assembly Hall, on Tuesday, 3rd of December 2019. IPB University ranks 2nd nationally and 40th in the world. The ranking was based on six main categories, infrastructure, energy and climate change, waste, water, transportation, and lastly, education and research. The seventeen main pillars of Sustainable Development Goals (SDG) were also considered as an additional criterion in the assessment. Through this assessment, higher education institutions registered in the UI GreenMetric are expected to present itself as an environmentally friendly campus.

This means that green campus not just remains a slogan, but also turn into culture for the academic body which would sustainably maintain nature and the environment. This year, there were 780 universities originating from 85 countries around the world which were registered to the UI GreenMetric 2019. In Indonesia alone, 72 higher education institutions participated in the assessment. In the welcoming speech by M. Dimyati, General Director of Research Enhancement and Development, on behalf of the Indonesian Minister of Research and Technology/National Research and Innovation Agency, it was mentioned that the UI GreenMetric must continue to be globally promoted. Not only does it magnify Indonesia’s value from the global standpoint, but it also equips the nation’s future leaders as campus’ graduates to continuously effectuate an environmentally friendly living condition. As an agricultural campus, IPB University works together with other green campuses around the world to make continuous effort in being leaders of environmentally friendly campuses and world green campuses.

In respond to IPB University achieving the Top 40 Green Campus, Prof Arif Satria as rector expressed his appreciation towards everyone who had contributed in bringing forth and maintaining IPB University up to this point. He hopes that through collaborations and mutual understanding, the campus environmental quality can be further improved.