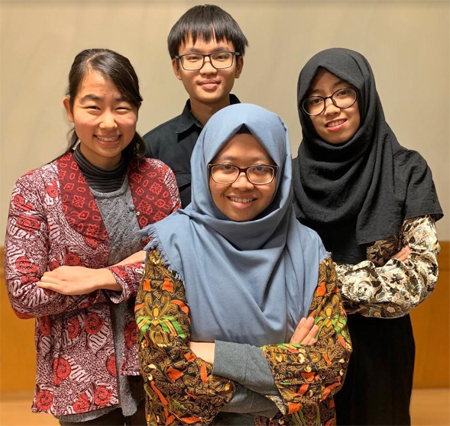 A multinational team formed by IPB University Graduate Student, Aryanis Mutia Zahra, wins 1st place in the Hult Prize on Campus Competition, making them eligible to compete in the Hult Prize Regional to be held early 2020. Her teammates are comprised of Nur Rahmawati Ayukaryana from Bandung Institute of Technology, Hua Yajun from Dalian University of Technology, China, and Miki Tatsuma from Tokyo University of Agriculture and Technology. Called ‘Mhaerofilter’, this time tries to overcome batik industrial waste and plastic bottle waste.

IPB University Graduate Student, Aryanis Mutia Zahra, formed a multinational team called ‘Mhaerofilter’ to overcome batik industrial waste and plastic bottle waste. Other members of the team consisted of Nur Rahmawati Ayukaryana from Bandung Institute of Technology, Hua Yajun from Dalian University of Technology, China, and Miki Tatsuma from Tokyo University of Agriculture and Technology (TUAT). They came up with the idea to manage wastewater from batik industries with aerogel as a filter made of PET type recycled plastic (r-PET). Mhaerofilter won first place in Hult Prize on Campus competition held on 8th December 2019, at TUAT, Tokyo, Japan, after competing with 20 teams, winning a place in the Hult Prize Regional. Aryanis estimates that around 2.65 million aerogels are needed by Indonesia’s batik industry which can be created by the conversion of plastic bottle waste produced per year. Each unit of aerogel can filter up to 524 liters of wastewater with a composition of 0.6 Kg wax produced by the batik industry in a week. The amount of wax filtered can be reused in batik production or safely disposed.

The aerogel will be marketed at a cheaper price compared to the installation of a waste management system. Due to its cheap price, Mhaerofilter team hopes that their creation will be accessible by various scales of business units in the batik industry. This innovation is hoped to encourage the promotion of batik globally as an eco-friendly fashion material. Aryanis states that the first step in this promotion is maximal effort in the Hult Prize Regional which will be held early 2020. Their team is still waiting for announcement of the host country where they will be competing again. Hult Prize is the biggest annual international-scale competition which challenges higher education students all over the world to find the best solution for various problems relating to Sustainable Development Goals (SDGs).

The theme of Hult Prize 2020 is “Building Startups That Have A Positive Impact on Our Planet with Every Dollar Earned”. Hult Prize Regional will be held in 27 countries which represent all geographical regions of the world. The best teams from competitions in all regional levels are entitled to a Startup Acceleration Program in Boston, held for six weeks in the Summer of next year. In the end, six of the best teams in the program would be chosen to pitch their innovation in New York with the chance of winning 1 Million USD to start their businesses.