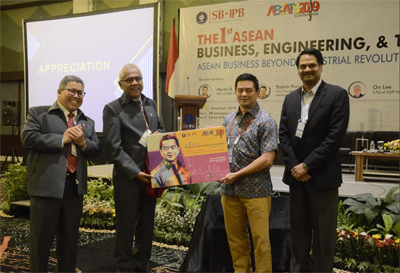 The MoU signing is held in The 1st ASEAN Business, Engineering, and Technology Symposium (ABEATS), which is the collaboration of Business School of IPB University, University of Science, Malaysia (USM), University of Glasglow, and Mara Techology University (UTM). IPB University and GDP Venture will hold an internship program, joint research, practical work, and also research which related with artificial intelligence in near future.

Agro-Maritime 4.0 is a developmental platform which integrates land and sea area management. Agro-Maritime 4.0 is implemented with enhanced social and economy capital, the optimal use of digital technology through transdicipliary, integrated and participatory, and also the principles such as inclusivity, transparency, environmentally friendly, creativity, critical and ethical thinking to increase national productivity and achieve sustainability, prosperity, justice, and sovereignty, which are the goals of national development.

Agro-Maritime 4.0 considers agriculture, marine, and biosciences (Agro-Maritime resources) as the future growth engines. Therefore, the role of villages, islands, and cities in Indonesia are very important as a center of growth, especially villages and small islands which take roles as a border economic for archipelago country like Indonesia, due to its important role as an economic buffer zone, which provides raw materials, tourism, marine and environmental services, and biodiversity.

“Connectivity between regions an islands is needed to run economy for the better, to get rid of injustice, and to secure national security and sovereignty. In this digital era, internet application of things (IoTs) in a various technology have played an important role at increasing the growth of villages and small islands. Not only that, IoT also gives solutions to the land constraints for producing agricultural products through factory automation or urban agriculture problem,” he added.

Meanwhile, The Dean of Business School of IPB University, Prof. Dr. Noer Azam Achsani, gave his appreciations to IPB University for being the host of collaborative event among universities in ASEAN. “We hope this collaboration will continue and become a routine activity” he said. (IAAS/NRF)