Rector of IPB University Praises the Cooperation Model in Japan 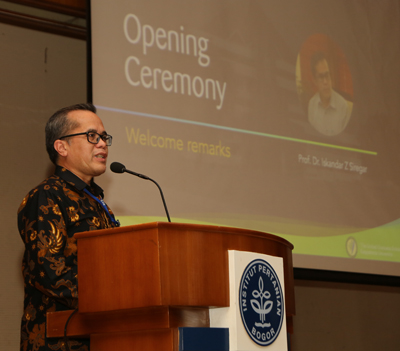 "It is time for research and development institutions in Indonesia to synergize, support each other and strengthen each other," he said.

On this occasion, Prof. Arif showed off innovations that were successfully created by his researchers. According to him, IPB University has a special room that is used as a place to display these products.

Meanwhile, IPB University's International Program Director, Prof. Iskandar Zulkarnaen explained that this symposium introduced the education system in Kagoshima and the research that would be developed in Indonesia.

"IPB is active in terms of cooperation with foreign countries. Every year, the target is to have one thousand people go abroad. At present the focus of IPB University is on the ASEAN program plus. In addition we also offer summerschool and student exchange. In terms of research, it will be identified, which are relevant," he said.

At this symposium, Prof. Kazuro Momii from Kagoshima University delivered information on the Rendai program. Rendai was founded in 1988 as an independent Doctoral Program for three years in collaboration with different universities.

At present, Rendai consists of Saga University, Kagoshima University and Ryukyus University. The aim of Rendai is to develop creative doctoral staff in agriculture and fisheries to promote basic and applied research related to these fields.

"For 31 years, 950 students have taken courses, including 553 international students and 138 doctoral dissertations including 24 foreigners. A total of 1088 students have received doctorates from Rendai School, "he said. (NR)