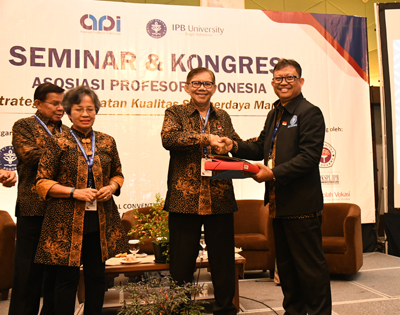 IPB University’s own Head of Professor’s Board, shortened as DGB, Prof Yusram Massijaya, was elected as President of the Indonesian Professor’s Association (API) for the period of 2019-2024. The election process was held parallel to API’s Seminar and the 2nd Congress at IPB International Convention Center (IICC), Bogor, on November 26th, 2019. Regarding API, Prof Yusram conveyed that the seminar and congress was the third event entrusted to DGB of IPB University. Previously, IPB University’s DGB has organized the Seminar for the Association of Indonesian Malaysian Professors (IPIMA) in Bogor back in 2015, along with another IPIMA Seminar held in Malaysia in the year 2017.

IPB University’s DGB has been involved in designing API since the beginning and was actively contributing by creating a proposal of policy formulation related to the Medium-Term National Development Plan (RPJMN) 2020-2024. In the future, IPB University’s DGB will provide more solutions to the nation’s problems. Regarding the increase of human resources in Indonesia, Prof Dr Arif Satria, Rector of IPB University encourages professors across Indonesia to keep inspiring. He completed his encouragement with a quote stating that great teachers are teachers who inspire, in which through it, the people are motivated to be great.

The previous president of API, Prof Sofian Effendi, MPIA, conveys the important role API holds towards science to propel forwards the development of the nation. This is especially true in contributing knowledge and real actions for both medium-term and long-term developments. He also states that through API, scientists are expected to analyze and evaluate public policies which will act as feedback for the government.