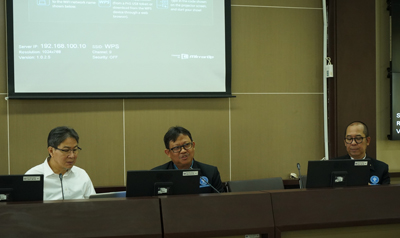 Prof. Yusram Massijaya, Chair of the Board of Professors of IPB University in his speech said that IPB University which is one of the leading universities in Indonesia in the future needs to think at the same time make a leap of thought to achieve a more prestigious international reputation such as the Nobel Prize.

He strongly believes that the academic community of IPB University can win the Nobel Prize by uniting together the steps together.

"Individually, there have been many IPB University lecturers who have succeeded in getting various awards both at national and international levels. The award is given for his achievements extraordinary in terms of science development and community service, "said Prof. Yusram.

Prof. Yusram added, with the collaboration between IPB University lecturers and world leading researchers, it was possible to achieve the Nobel Prize in groups.

After this discussion, he will immediately identify potential lecturers and map them so that IPB University is able to win the Nobel Prize. The starting point for this effort is the innovations that have been produced by IPB University.

This Focus Group Discussion (FGD) was held in order to solicit various input in making "white paper" which will be prepared by the Ad Hoc Committee (PAH). It is PAH that will realize the mission "Road toward a Nobel Prize" which will provide input as well as a foundation for decision makers in carrying out this new mission of IPB University.

The same thing was said by Prof. Ronny R Noor, Chair of Commission C Academic Senate who is also an Ad Hoc Committee (PAH). He said the leap of thought related to IPB University Towards the Nobel Prize was not unreasonable. This is because in terms of research, innovation and community service, IPB University has made its achievements.

Some of them are IPB University as the initiator of BIMAS which has succeeded in realizing food self-sufficiency programs in Indonesia, the most innovative campus in Indonesia and various other achievements.

In addition, he conveyed the importance of IPB University's human resources to collectively realize that if you want to get a nobel prize, it is necessary to give birth to extraordinary inventions that can provide great benefits for benefit of humanity.

From the analysis of the situation and conditions of the winners of the Nobel Prize it was concluded that nobel prizes were only given selectively with criteria the main work that provides benefits for the wider community.

Nowadays agriculture is one of the strategic fields and has a great opportunity in producing the next Nobel prize winner. In addition, career and development of the international reputation Nobel prize winners are usually gradual, require a long time as well its success is supported by the work environment in generating ideas brilliance.

"In an effort to give birth to this extraordinary invention, of course, a way is needed think realistically and focus on certain areas of research where possible to win this prestigious award, "said Prof. Ronny.

This realistic way of thinking needs to be followed by concrete steps in building international level research network which has quality laboratories world-class in order to produce superior, specific and published in leading scientific journals.

In supporting this new mission, IPB University as an institution needs to plan well its human resources so that in the future it will become a reliable resource in developing its reputation and research career at the international level.

"It is hoped that within the next 10 - 25 years IPB University is expected to be able to realize its mission to achieve international achievements both in meeting targets between national and regional levels as well as the main target of winning the Nobel prize," concluded Prof. Ronny. (NR)