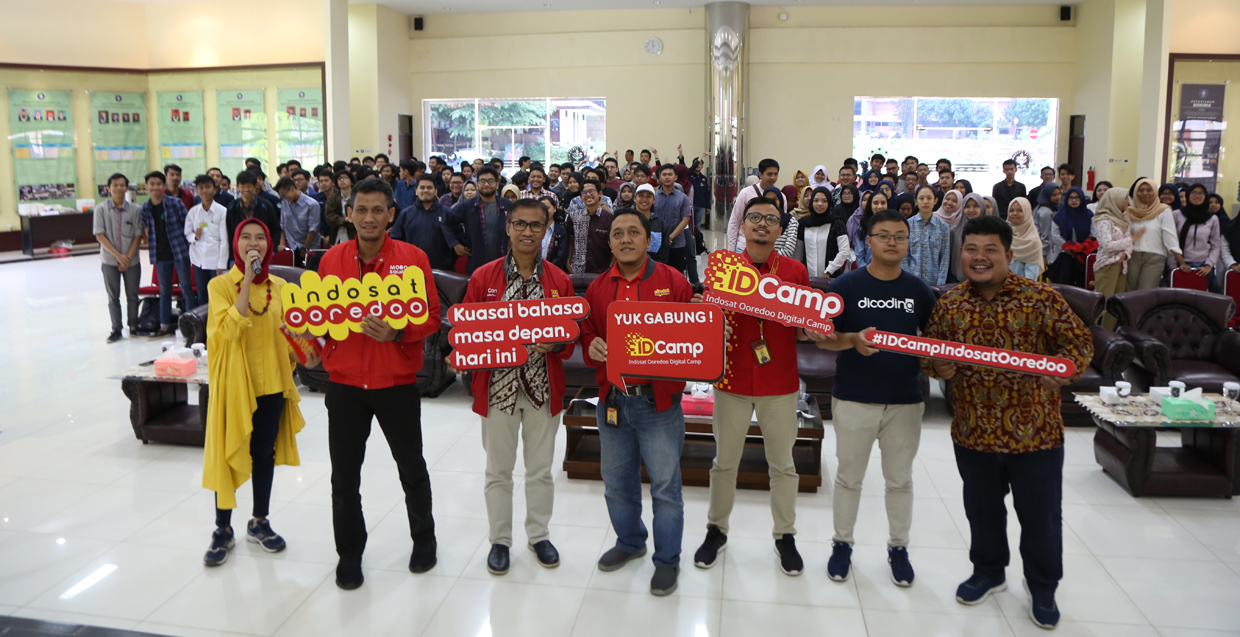 Indosat Ooredoo in collaboration with IPB University held an Indosat Ooredo Digital Camp (IDCamp) scholarship roadshow. Roadshow was one of a series of IDCamp activities that contained sharing sessions and talk shows about the development of the digital industry in Indonesia. In addition, the roadshow was also conducted to the developer community in Bogor to invite participants to join the coding scholarship program.

The roadshow, which was held at the Auditorium of the Faculty of Mathematics and Natural Sciences (FMIPA), IPB Dramaga Campus, Bogor (17/10) was lively and full of enthusiasm. On the occasion, the Rector of IPB University, Dr. Arif Satria expressed his gratitude to Indosat Ooredoo who had given IPB University students the opportunity to learn how to code.

Present as a talk show speaker, SVP-Head of Major Accounts of Indosat Ooredoo, Asrul Ardianto. He could feel that IPB University really welcomed this program. Indosat Ooredoo continued to encourage Indonesian young talents to take part in the IDCamp program, whose registration was open until October 18th, 2019.

"We are optimistic that IDCamp, which until now has distributed more than 25,000 scholarships to learn coding online, will produce young digital talents who are able to compete with global talents, and play a role in advancing Indonesia's digital economy," he said.

Asrul also added that more and more industries are continuing to develop digital-based systems and management. This requires students who are experts in basic knowledge which was learned during college. The agriculture sector for example, the development of digital tools certainly requires knowledge of agriculture itself. And apparently IPB University complements the whole of the sector not only agriculture but also fisheries and marine affairs.

The high demand for digital talent and job opportunities in digital technology, is the basis for Indosat Ooredoo to launch the IDCamp program. Indosat Ooredoo invites young people who are interested in the field of digital technology by providing online coding scholarships that include the Android developer module, Android Kotlin and Progressive Web Application. For beginner and expert levels with a total duration of six months. Also provided offline training (face to face) for prospective developers who have limitations (disabilities).

Also present as the talk show speaker, Ir Julio Adisantoso, M.Kom as the Director of Information Systems and Digital Transformation of IPB University. He thought that students were very potential to grow into digital talents. "Digital transformation in various sectors including education has become a trend. So many new systems emerge that would require a lot of developers or digital experts needed," he said.

On the occasion, also attended was Kevin Kurniawan, as a representative of Dicoding Indonesia, a forum for coding-based students from various regions across the nation.

"There is a gap between graduates with IT skills with the needs of digital experts in the industry. We are here to try to close the gap. In collaboration with IDCamp, Dicoding is here to facilitate the learning of coding language for young people," he explained.