Educate the Importance of Waqf, SES-C IPB Collaborates with the Indonesian Waqf Board 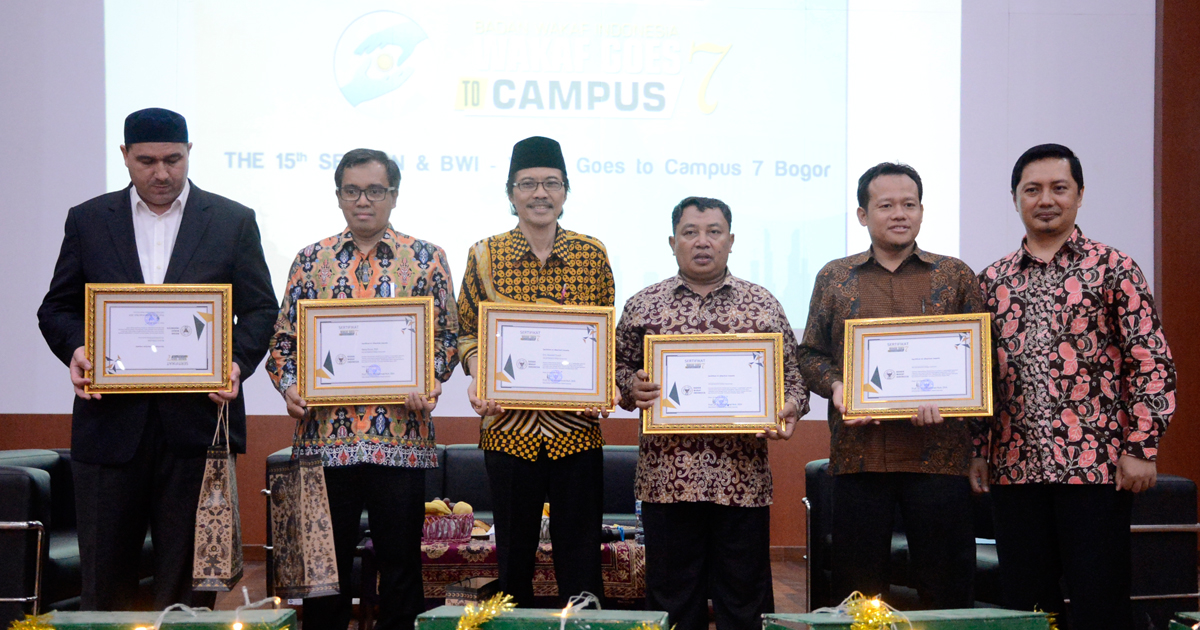 Waqf in Islam is one of the economic instruments that has enormous potential in realizing welfare and social justice.  But this potential has not shifted much to become a real power that is able to contribute greatly to the development of the welfare and dignity of society, nation and state.

Based on that, the set of Sharia Economics study programs at the Bogor Agricultural University, the Sharia Economics Student-Club (SES-C) in collaboration with the Islamic Economic Study Group (KSEI) throughout Bogor Raya and the Indonesian Waqf Board (BWI) initiated The 15th SEASON and BWI-  Endowment Goes to Campus VII Bogor, (9/26) at Dramaga Campus, Bogor.

The activity was carried out as a medium for socialization, education while increasing waqf literacy to the academic community.  The 15th SEASON presented speakers from various groups, including Bulent Disbudak, from the United Islamic Cultural Center of Indonesia.

"Waqf is one way of giving alms in the way of Allah and also stimulates the distribution of wealth in society as mentioned in Q.S Al-Hasyr 59: 7.  Rasulullah SAW promised that the rewards that continue to flow until the hereafter will encourage people to do this charity, "said Bulent.

Bulent added that waqf could effectively prevent the accumulation of excess assets in the economy and make the distribution of assets continue to trigger economic growth.

According to the Chairperson of the Indonesian Waqf Board, Prof. Dr. Muhammad Nuh, waqf is a strategic instrument to improve the welfare, quality of da'wah and maintain dignity and eternity.

Prof. Muhammad Nuh also invited the IPB University community to jointly build a tradition as Assabiqun-al awwalun (Good Creator-Innovator) by realizing Millennial Sociopreneurs.  According to him, building a sociopreneurship ecosystem with imagination, critical thinking and higher order thinking is very important in the present.

He advised, to do not need to wait for rich and mature.  Students can certainly start speaking.  The key is there must be a commitment to make waqf a habituation.  So that when it becomes a habit, a person will be easier to do something, including of course having a degree.

While Nana Riana, PhD, Director of Sharia Financing at the Directorate General of Financing and Risk Management, Ministry of Finance of the Republic of Indonesia stated, Cash Linked Waqf Sukuk is a form of government commitment to the development of social investment in Indonesia.  The government facilitates BWI and endowments to invest endowment money in Sukuk.

"Sukuk rewards in the form of discounts will later be used to build projects that will become waqf assets.  For example madrasa, health clinics, boarding schools and so on.  While sukuk rewards in the form of monthly returns will be used to finance social programs managed by social institutions appointed by BWI.  Waqf sukuk funds will return 100 percent to the waqf when the Sukuk Negara is due, "Nana explained.

Also present at the event were Vice Chancellor for Resources, Planning and Finance Prof. Dr. Ir Agus Purwito, MSc Agr;  Deputy Dean for Academic and Student Affairs of the Faculty of Economics and Management, Dr. Ir Anna Fariyanti, Msi, Head of Sub-Directorate for Safeguarding Endowments, Directorate of Zakat and Waqf Empowerment, Ministry of Religion of the Republic of Indonesia, Dr. Zaenuri, MHum and the Public Relations, Socialization and Literacy Division (Husoli) of the Endowment Board,  Susono Yusuf (rizky / Zul)