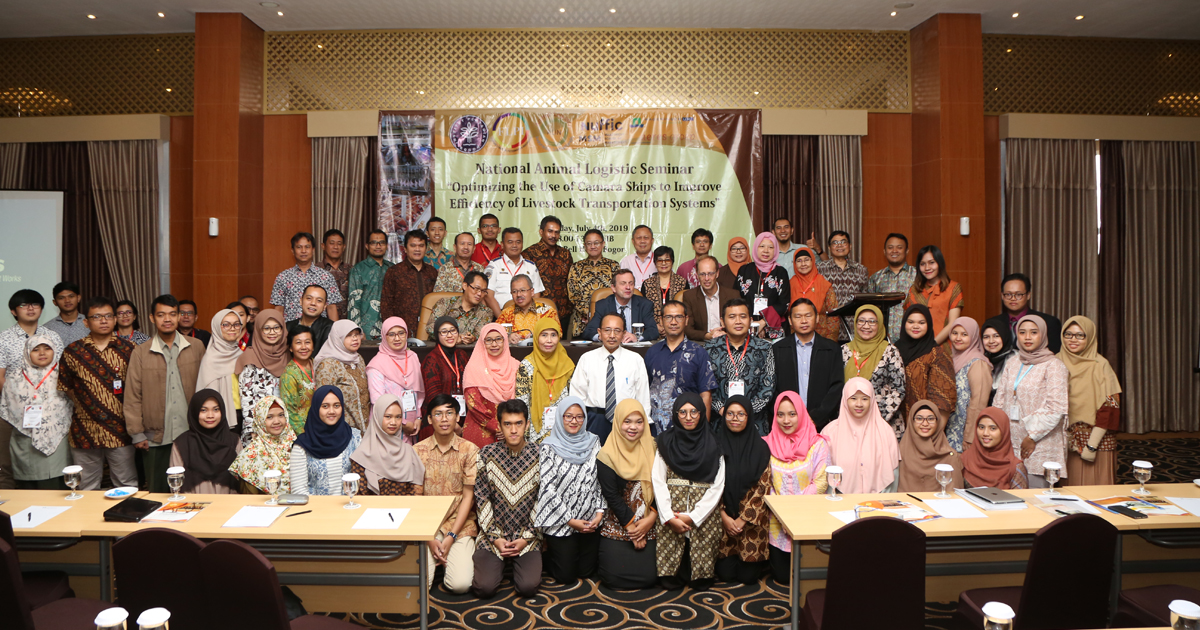 Faculty of Animal Science, IPB University, alongside with a number of Dutch consortium members from Nuffic, Maastricht School of Management, Wageningen University and Research, and Aeres groep formed a project called ALIN (Animal Logistics of Indonesia–Netherlands). Through Indonesian Animal Logistics Forum (FLPI) platform, the collaboration was launched during National Animal Logistics Seminar with the theme "Optimizing the Use of Camara Ships to Improve Efficiency of Livestock Transportation Systems" at Bogor, on July 7th, 2019. Rector of IPB University—Dr. Arif Satria expressed his appreciation that collaboration is among the efforts in responding to current situation related to industrial technology development 4.0. IPB University encourages 4.0 Research and Innovation characterized by high-precision agronomy through the use of a drone, robotics, and artificial intelligence. He as well emphasized that in the future agriculture and marine sectors, agro-industries, digital agro-logistic systems, and intelligent e-commerce systems are believed to adapt to the aforementioned era of 4.0. Director of the Dutch consortium—Mr. Meinhard Gans stressed that the activities carried out are for the advancement of Indonesian livestock logistics in the future. Director of ALIN project—Prof. Luki Abdullah (Faculty of Animal Science, IPB University) said that the project was initiated in collaboration with Indonesian and Dutch respective governments through the Ministry of Agriculture and Dutch Embassy. It was motivated by challenges Indonesia has been facing regarding logistics, including facilities and infrastructure lacking and poor livestock handling. Those issues had resulted in high logistics and transportation costs, high weight loss, livestock performance, and animal welfare. These factors caused high prices for consumers, but also lower prices for producers, thus reducing their margins. Efforts have been made by the Indonesian government to improve the supply chain of domestic cattle, mainly from eastern Indonesia to consumers. As solution, a cattle boat built named Camara Nusantara 1 was firstly launched on December 2015. The second boat—Camara Nusantara 3 was launched in 2018 and the total number is expected to increase to six units. The Indonesian government built the ship that is operated by Pelni—a sizeable domestic shipping company. Ships are designed to meet principles of animal welfare, so that weight loss during transportation will be minimized while increasing performance. Furthermore, cattle vessels are expected to increase cattle supply chain and shorten distribution chain from producers to end–consumers. ALIN is considered as the first project in Indonesia exclusively related to animal logistics with several focuses on how to develop human resources in field of animal logistics. In regard to implementation IPB University, this program is developed through livestock logistics curriculum within Master of Science in Study Program of Animal Logistics. There is also Bachelor Plus program on animal logistics in form of 6–month–education post–graduation with advantage of competency certificate established by the National Professional Certification Agency and Ministry of Manpower. During this seminar, several presentations were given about traceability, live animal transportation feed logistics, animal products and human resources to the present universities academias, business, government, associations, and communities.