IPB Researcher: Beware of New Pests of Armyworms in Corn 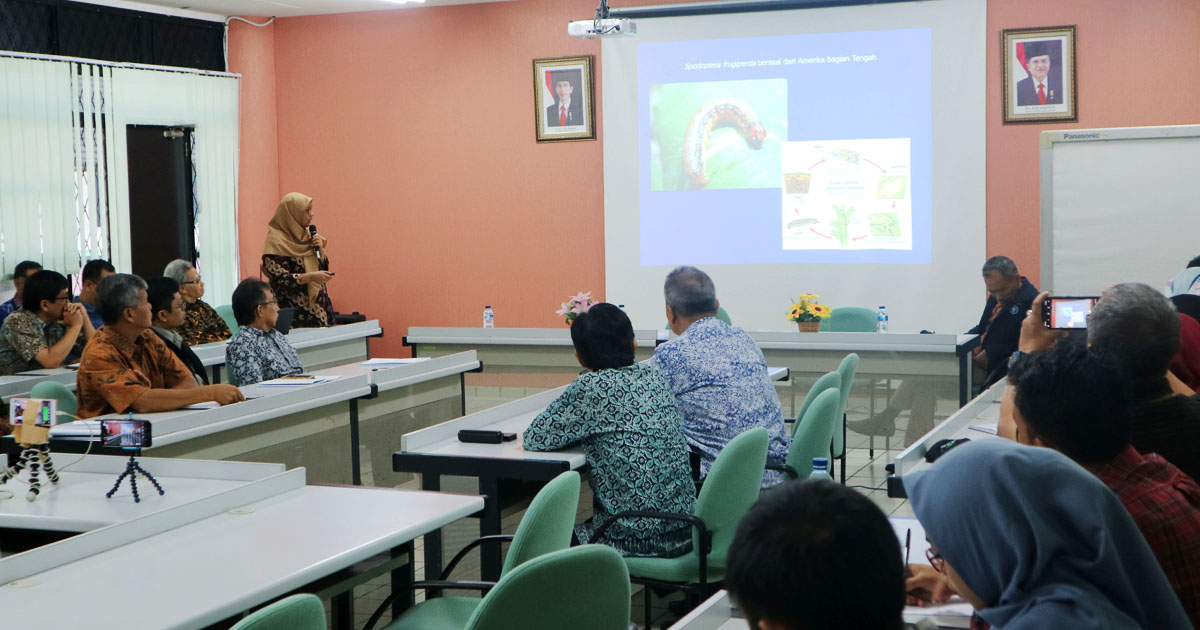 The IPB University research team found new armyworm pests in corn, namely Spodoptera frugiperda. This pest is reported to appear in Pasaman Barat, West Sumatra in March 2019. Until now the presence of S. frugiperda pests has been found in several provinces such as West Java, Central Java and West Kalimantan.

To recognize these pests, Dr. Dewi Sartiami, one of the research teams at the Department of Agriculture's Plant Protection explained the S. frugiperda pest has a pattern like the inverted Y and yellow in the head. In parts of his body, there are pale yellow lines on the dorsal and bright yellow lines in the sub dorsal part of his body. In the abdomen, there is a thick line in the form of a bright yellow ribbon. Whereas in the 8th segment of the abdomen there are four pinacula or rectangular-shaped spots.

"When the generative period, S. frugiperda pests attacked the flowers and corn cobs. The part of the flower that is attacked is the base of the male flower, while the cob is attacked inside and the larva is hiding inside," added Dr. Dewi.

Commonly affected corn plants are stools from S. frugiperda larvae which are scattered. Attack on leaves, causing hollow leaves in a square shape.

Although the damage caused by S. frugiperda pests was 100 percent, Prof. Dr. Ir Aunu Rauf, Permanent Professor of the Department of Plant Protection, Faculty of Agriculture, IPB University, confirmed that the loss of yields from these pests did not reach 100 percent.

He revealed, the S. frugiperda pest attack in Africa caused yield loss of only 11.57 percent, while in Indiana, the United States of 100 percent of the plants were attacked, the yield loss was only 15-30 percent.

"So don't panic, damage in the field can be 100 percent, but the lost results are not necessarily 100 percent. Even so, I appeal to all parties not to immediately use synthetic pesticides to control this pest," added Prof. Aunu.

In addition, the behavior of caterpillars or larvae who prefer to hide inside the shoots can make it difficult for farmers to spray pesticides. On the other hand, it turns out that the large S. frugiperda larvae have been reported to be tolerant of insecticides.

Therefore, the strategy of invasive foreign pest management, continued Prof. Aunu, which can be done at this time is to use the principle of Integrated Pest Management (IPM). This is because in the field a natural enemy is found which attacks the pest S. frugiperda. Natural enemies found attacking S. frugiperda pests include Tricogramma (egg parasitoid) and Telenomus romus (egg parasitoid). On the other hand there are potential biological agents to be developed, namely Metarhizium rileyi. This biological agent was found to infect S. frugiperda larvae found in Cikoneng, Banten. (RYS)