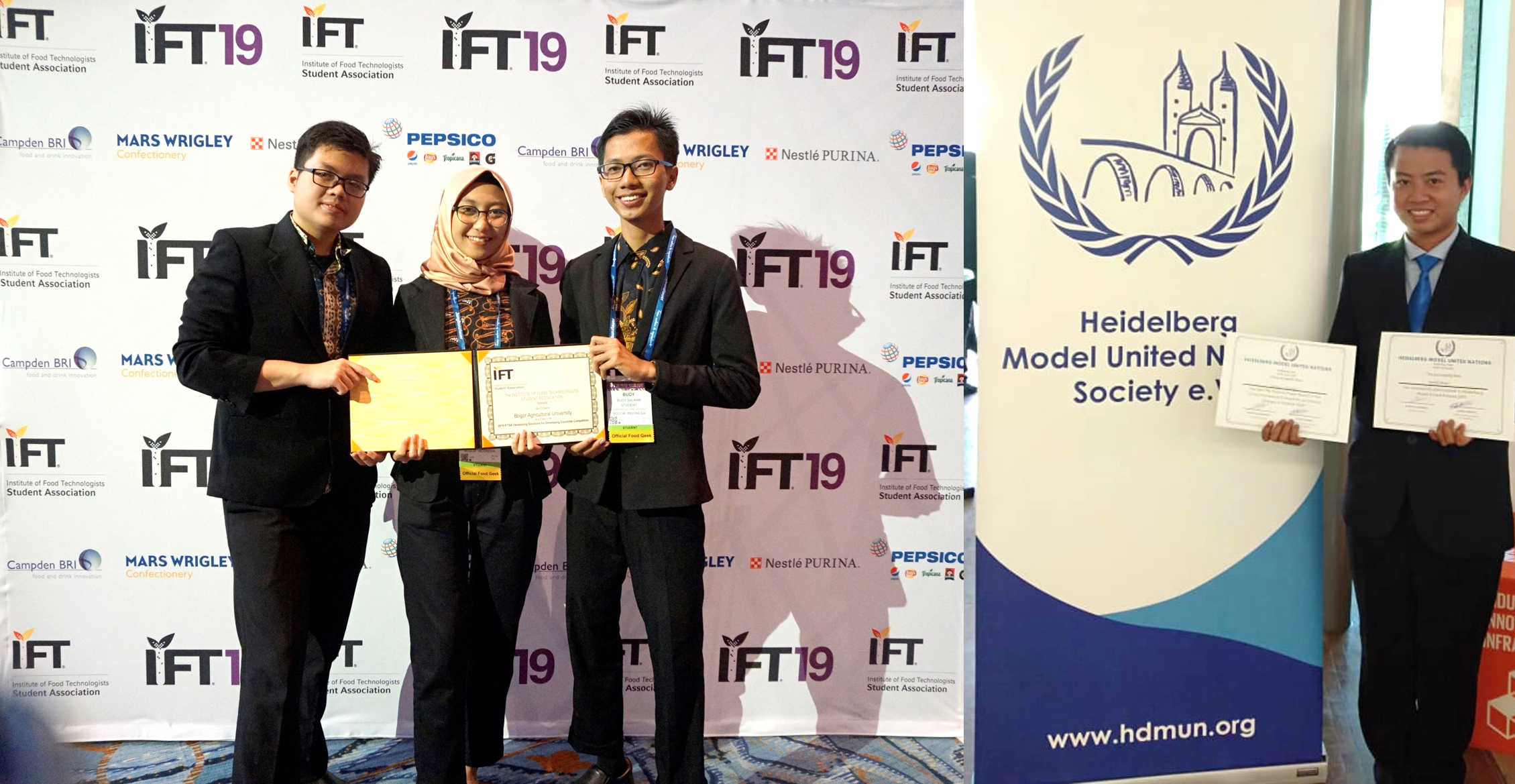 “Go-Crokies” team with members namely Ditta Hakha Soleha, Budy Salaam Muhammad and Darren Tanaka—undergraduate students from Department of Food Science and Technology, Faculty of Agricultural Engineering and Technology, IPB University triumphed as first runner up in IFT’19 Feed Your Future on June 2nd-5th, 2019 in the Ernest N. Morial Convention Center New Orleans, LA, U.S.A. Institute of Food Technologists (IFT)’s Annual Event and Food Expo is one of the largest events of its kind bringing together science of food professionals from around the globe representing all segments of the science of food profession—research and design, ingredients, safety and quality, technology, equipment, processing, packaging, manufacturing, suppliers and buyers, policy makers, and academics—all converging with the intention to inspire and transform collective knowledge into innovative solutions to help advance our planet’s food safety, nutrition, and sustainability. Bringing theme of “Developing Solutions for Developing Countries”, this year total 45 papers from 5 continents were submitted, where at last produced 6 top finalists namely “Go-Crokies” (IPB University, Indonesia), “NutriBaBaw” (Cornell University, U.S.A.), “WelBodi” (Washington State University, U.S.A.), “Nelhuayotin” (University of Costa Rica), “Jack Mung” (Taylor's University Lakeside, Malaysia) and “MORINGAU” (Lund University, Sweden). “Go-Crokies” team in their presentation utilized an alternative protein source from cricket. As human shall consider proteins other than animal protein by 2050, this solution is assessed as an amazing idea not solely for under-development countries, but also developed countries. The point of novelty, safety, feasibility, finance, environment, and other important concerns were said to be the strengths of “Go-Crokies” team until they could won the second place and won total prize of $1,500. It was also proud news that the Winner team—Lund University, Sweden’s “MORINGAU” team members are bachelor’s graduates from Department of Food Science and Technology, IPB University. It very well evidenced the expertise and high competence of the IPB academia.

On the other hand, previously in France, Mahtuf Ikhsan—undergraduate student from Department of Forest Management, Faculty of Forestry, IPB University once again did the institution proud. He received Honorable Mention Award in 8th Reims International Model United Nations (RIMUN) 2019 in the Paris Institute of Political Studies (Institut d'Études Politiques de Paris), commonly referred to as Sciences Po, in Reims, France on February 15th-17th, 2019. Sciences Po was placed 3rd in the world for Politics and International Studies (1st in France) according to QS World University Rankings 2019. RIMUN was initiated in 2011 and held its first edition in March 2012 on the Euro-American Campus of Sciences Po Paris in Reims. Today, RIMUN is a landmark association of Sciences Po campus, and one of the biggest events of the academic year. As the project keeps growing, the 2019’s 8th edition of RIMUN with theme of “Globalization and Isolation: Crisis of Coexistence” became the largest edition of RIMUN to date. This event was targeted to resolve one of the defining questions of world’s modern era due to globalization and migration, such as not merely new interconnectedness, improved quality of life, increased cultural and academic exchange, greater economic growth, but also crisis of coexistence worsened inequalities, devastated minority cultures and languages, and developed a system of economic dependency. Mahtuf as well most recently is humbled for another accomplishment of Best Position Paper Award in Heidelberg Model United Nations (HDMUN) 2019, 3rd edition: “Redefining Order”, held on May 30th–June 2nd, 2019, in Germany’s oldest university, the Ruprecht-Karls-Universität Heidelberg. HDMUN was first created out of the aspiration to bring the United Nation’s characteristic values of diplomacy, and consensus-oriented debate to Heidelberg, while offering some of Heidelberg’s academic excellence as one of the leading university’s in the world, to the UN problem solving dynamics. Since then, HDMUN has hosted two successful conferences, hosting over 200 delegates from all continents of the world, achieving so the aspiration the conference was built upon.