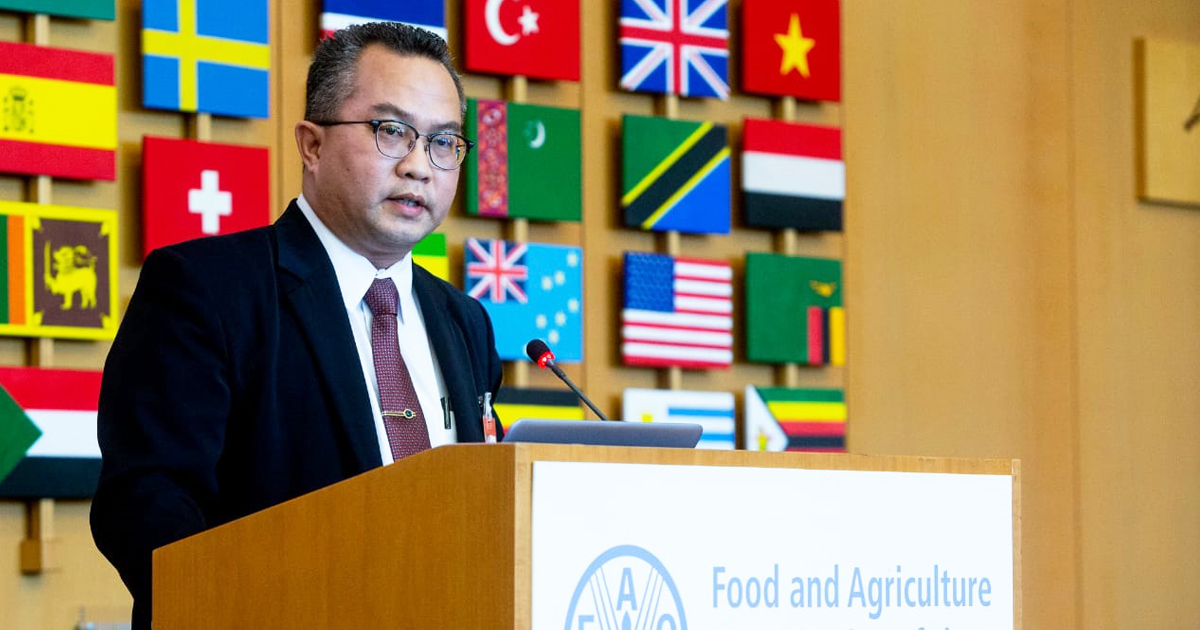 The Rector of IPB University—Dr. Arif Satria was invited by the Food and Agriculture Organization (FAO) to convey the main points of the meeting on "Digital Agriculture: Challenges to be Addressed" held on June 12th-13th, 2019 at FAO Head Office in Rome, Italy. The Rector, who was the only speaker from a university, explained the concept of IPB University in the Agro-maritime 4.0 and introduced 25 digital innovations by both IPB lecturers and students on topics such as food security, climate change adaptation and mitigation. One of the innovations introduced was the Fire Risk System (FRS), which is a digital system capable of predicting forest fires for the next six months in ten provinces. This system has been submitted to the Indonesian Ministry of Environment and Forestry, and the National Forest Monitoring for early warning of deforestation. Also, the Underwater Televisual System (UTS) was introduced to monitor the underwater ecosystem digitally; while the TrekFish, which is a crucial recording device for fishing trails, was also developed to support Seafood Import Monitoring (SIM) and guarantee traceability.

IPB's innovations included Smart Seed, which is an application that uses satellites, climate modeling, big data, and internet of things based on android for 100 thousand vegetable farmers in Indonesia to support food security. There was also a smart system for controlling pests and plant diseases, a smart system for blockchain-based agro-logistic development, and PreciPalm, which is a satellite-based precision fertilization recommendation system for more efficient and adequate fertilization. The event, which was directly opened by FAO General Director—Jose Graziano da Silva, was attended by around 250 participants from member countries, including ministers, ambassadors, ministry officials, and FAO leaders and multilateral institutions. Present at this forum was Indonesian Ambassador in Rome—Mrs. Esti Andayani, accompanied by Agriculture Attaché—Mrs. Ida Ayu Ratih. On that occasion, Dr. Arif said that digital agriculture has become a necessity. However, there is a need to notice that the majority of small-scale farmers characterizes the third world conditions.

Therefore, the development of digital agriculture faces special challenges. Dr. Arif proposed four digital farming strategies for developing countries. First, the development of rural communities is needed so that those communities could be better prepared to take advantage of digital innovations. IPB University has ever developed an increase in digital literacy of farmers in eight provinces and seventeen districts in collaboration with the Ministry of Communication and Information of the Republic of Indonesia. Also, the Precision Village program that helps rural communities conduct precision village planning based on data and digital technology by implementing participatory drone-based mapping. Second, the Agro-Maritime 4.0 research roadmap will help research to be more directed with concrete and measurable results within the community. Third, the framework is required for implementing the Agro-Maritime 4.0 concept so that business people from various social layers can apply this digital farming model. This aspect is important because the agro-maritime actors in the third world are diverse, some are already ready for the technology, and some are not. This is where the collaboration between stakeholders is needed, and it needs the support of international institutions such as FAO and The International Fund for Agricultural Development (IFAD). Fourth, the regulatory framework must be prepared immediately, while the implementation of digital agriculture is not yet widespread. So far, the regulation has always been late compared to technological developments. In this regulation, affirmations need to be emphasized for small-scale farmers so that they can become important parts of the transformation of this modern agriculture.