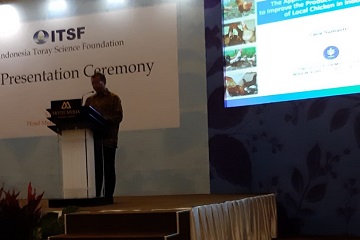 The professor of the Faculty of Animal Sciences IPB University, Prof. Cece Sumantri wins the Indonesia Toray Science Foundation (ITSF) Science and Technology Award with the prize of Rp 100 million. Prof. Cece wins this award for his research about molecular genetics for productivity and quality development of Indonesia’s local chicken.

The award was given in Hotel Mulia Ballroom, Jakarta (5/3) by ITSF Chairman, Dr. LT Handoko, which is also the Chairman of Indonesian Institute of Sciences (LIPI), Executive Vice President Toray Industries Inc., and representatives from the Ministry of Research, Technology, and Higher Education, the Ministry of Education and Culture, and the Embassy of Japan.

According to Prof. Cece, Indonesian local chickens have a high genetic diversity. His research succeeded in identifying marker genes in kampung chickens, which were used in the selection process for breeding. The results of this development are local chicken varieties named IPB-D1, which can grow fast, have high-quality meat and are more resistant to disease attacks.

“Endemic chicken or local chicken is disease-resistant, has good meat, healthy, and organic. Because the feed is acquired naturally by the chicken,” said Prof. Cece.

Given this potential, local chickens can be developed in disadvantaged villages so that they can help improve the economy of the local community. Meanwhile, people who maintain local chickens, generally kampung chickens, can increase their protein intake by eating their own chicken.

Maintenance of kampung chicken is rather easy. Kampung chicken can be kept in a cage made around the house with a size that is adjusted to the number of chickens that are kept. In fact, with a narrow land can also maintain the native chicken.

For feed, breeders can utilize existing natural resources such as bran, rice bran, corn, cassava, worms, and snails. Chicken worms and snails are needed as a source of protein, so the chicken will have a strong endurance.

This potential has now been level up by the establishment of a community of laughing chickens and pelung chickens. Through it, the community was invited to preserve Indonesian native chickens, especially the laughing chicken, so it would not become extinct.

In addition to the award, the foundation, which was funded by Toray Industries Inc., an industrial company from Japan, also awarded the Science Education Award, an award for 10 science teachers in junior and senior high schools as well as equivalent schools, who have developed innovative science teaching methods. Each award recipient received a prize of Rp 25 million.

ITSF also provided research assistance funds to 18 researchers from universities and research institutions, with a total value of assistance of Rp 700 million.