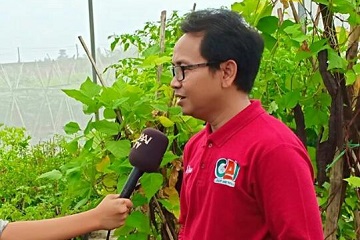 Data from the Central Statistics Agency (BPS) showed that soybean imports from January to October 2018 had reached 2.20 million tons. The high import rate of soybeans can slowly compete with local soybeans. As a result, domestic soybean production continues to decline. Data from the Ministry of Agriculture showed that national soybean production continued to decline over the past three years, from 963 thousand tons in 2015 to 859 thousand tons in 2016, and only 538 thousand tons throughout 2018.

"Actually, agricultural problems must be overcome by local wisdom. However, soybeans are from abroad, thus, it is natural if soybean production abroad is high. As a result, the price of soybeans abroad is cheap. One of the soybean-substitute bean is winged bean which is native to Indonesia. This research had been started since the 70s and it was revealed that this bean is similar to soybeans. The protein content even reaches 30 percent," explained Prof. Dr. Muhammad Syukur, a lecturer at the IPB University who has special expertise in the field of horticultural plant breeding, one of which is winged bean.

Winged bean is one of Indonesia's tropical plants that grows in the highlands. For Indonesian people, winged plants are consumed as vegetables. In fact, winged plants have greater potential. The roots, leaves, fruit and bean parts can be processed into tempeh, tofu and winged bean milk.

Prof. Syukur said that based on literature, all Rhizopus (yeast) can grow well in winged beans media, so that this bean is suitable for being used as raw material for making winged bean tempeh.

At first, Prof. Syukur was inspired by Australian researcher who came to him and advised him that winged beans are very potential to be developed. And this researcher then gave several research journals he had done with the team. This then prompted Prof. Syukur to more explore the winged beans. Prof. Syukur finally tried to cross the beans originated from Thailand with the beans from Indonesia, and the result produced winged beans which was fast flowering, had high productivity and able to adapt in Bogor.

"According to the literature, this winged bean can produce 4.5 tons of dry beans per hectare, which is three times greater compared to soybean productivity which is 1.5 tons per hectare. If the winged bean plant is harvested when it is still young, it can produce a total overall weight of consumption of 35 tons per hectare. Seeing the great potential of winged beans, this research must be done more intensively, and we will do it as central breeders to produce new varieties that can be used by farmers," he concluded. (SM/Zul/ZSP)