Professor of IPB: Pollution Level in the Citarum River Basin Is Acute, Its Biotas Are Not Safe to Consume 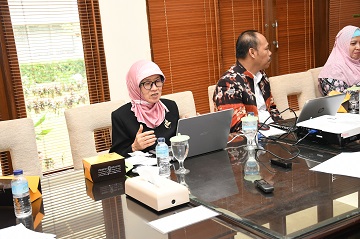 Very complex anthropogenic activities in the Citarum River Basin, making the Citarum watershed covered by many conflicts of interest and making the Citarum River the third dirtiest river in the world. Based on the research of the Professor of the Faculty of Fisheries and Marine Sciences (FPIK) of the Bogor Agricultural Institute (IPB), Prof. Dr. Etty Riani, Cisanti spring and Situ Cisanti which are at zero point, have been polluted by heavy metals and organic materials.

"The Citarum River is also a place for industrial waste disposal and other activities with increasing and more diverse quantities. From Situ Cisanti, entering the industrial location, there was a significant increase in toxic materials and organic matter. Pollution continues to increase until in the Saguling Reservoir. Furthermore, it tends to decrease towards the Cirata Reservoir and is relatively fixed to the Jatiluhur outlet. Based on depth, it can be seen that the deeper the reservoir, the more pollution and toxic material. In locations that have floating net cages (KJA), pollution and toxic materials also tend to increase. Even in KJA, the benthic animal disappears. Even if there are, like in Saguling, there are many people who experience disabilities, "he explained during a press conference on the Pre Scientific Speech at Baranangsiang's IPB Campus, Bogor (22/2).

Heavy metals can enter the body of the fish through the body surface, gills or through the eating process. Furthermore, it accumulates in body organs and is irreversible. The result is damage to organs such as gills, kidneys, liver, spleen, brain, heart. Examples are tilapia, goldfish and other biota in the Citarum watershed. More severe accumulation of heavy metals and organ damage occurs in barracuda, pepetek fish, sokang fish, beloso fish and green clams in Jakarta Bay. These toxic materials have also resulted in the occurrence of defects in the sironomid in the Saguling Reservoir and green mussels in the Bay of Jakarta.

"The content of the toxic material also causes fish to be unsafe freely. The maximum limit of fish meat consumption from the Citarum watershed per week varies based on the heavy metal. Consuming fish meat originating from the Citarum watershed has the risk of developing cancer which is still very small, but has the potential to cause degenerative non-cancerous diseases, "he explained.

Prof. Etty recommends meat from aquatic biota in Jakarta Bay that can be tolerated to be consumed in one week per kilogram per adult weight (50 kg) and children (15 kg) if it is seen from the Hg content, it can only be consumed in amounts which is very small (0,002-0,043 kg). Even green mussels seen from all heavy metals are recommended not to be consumed. Fish on Seribu Island even though the meat has been contaminated with heavy metals but the concentration is very small so it is still relatively safe for consumption. "Therefore, consuming fish meat from the Bay of Jakarta has the potential for cancer and degenerative non-cancer diseases," he added.

The condition of the level of pollution and the amount of toxic material found in the Jakarta Bay, which is the site of the 13 rivers, is very large and increases very sharply from year to year. Considering that Jakarta Bay not only gets pollutants from land which generally enter through rivers, but also from activities in the waters that contribute enough pollutants.

Management options for the region are to carry out integrated management planning between rivers, coasts and the sea as a unit known as the Integrated River Basin, Coastal and Ocean Management. There are three cohesiveness that must be considered, namely the integration of spatial and temporal river, coastal and marine ecosystems, functional integration namely horizontal integration between sectors in an administrative scale, for example in one district and integrated policies, namely cross-administrative integration, for example in village vertical lines "sub-districts or city-province-national," he added.