Professor of IPB: For Food To Be Enough, Indonesia Must Work Seriously on Millennial Food Trends 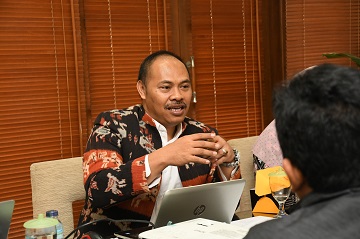 The trend of the millennial generation in the next 10-15 years must be observed. It turns out that millennials have different ways of meeting their food needs. "Millennials like local and ethnic food. Like food that can prosper farmers and nourish the earth. Or for the term now is sustainable agriculture," said Prof. Dr. Edi Santosa, Permanent Professor of the Faculty of Agriculture (Faperta) of IPB University during a press conference on the Pre Scientific Speech at the Baranangsiang Campus IPB, Bogor (21/2).

To reach Indonesia Gold in 2045 (100 years of independent Indonesia), there are three major challenges, namely parsing the classic problems of food and agriculture (decreasing the number of farmers, limited land, price disparity with foreign countries and farmers' welfare). Second is to anticipate the system in a fast-changing world following the 2045 megatrend and third is the presence of millennium consumers.

According to him, one of the characteristics of the millennial generation is liking local food. Local food according to Prof. Edi is food consumed by the local community in accordance with the potential and local wisdom produced in the archipelago by farmers who are close to consumers (the distance is at most 100 miles or 160 km).

"In the next ten years, the number of millennials will reach 41 percent of Indonesia's population. So, they are our food actors. This millennium consumer (which is parallel to the fast flow of information) has nine food criteria, according to Rosenbloom (2018). That is clear identity, visually attractive, easily ordered online, likes local production, saves the environment and enjoys ethnic food. If we can manage food issues in the millennial generation, then our food availability will be enough. Create a stimulus so that food experts can create interesting food variations from local food. We don't have our technology yet," he said.

On the other hand, local food such as sago, breadfruit, pumpkin machete, gadung, huwi, canna, kimpul, iles-iles, suweg, taro, and sorghum have taken root in society in socio-cultural ways in cultivation and utilization. Local food development is needed such as preparing food references for millennials.

"Reference to millennial children is friends, mothers, websites, blogs, and social media. Based on research, young mothers (under the age of 35 years) no longer interact with local plants. Even though our local food potential is very large. In Aceh, there are 160 varieties of food made from 123 types of local ingredients. On the island of Sabu, there are 35 types of local food plants that can be processed into hundreds of types of food. Even the iles-iles have been used by Japan since the days of World War II. In addition, iles-iles tubers appear to contain glucomannan. Glucomannan flour has been processed into shirataki healthy noodles, becoming organic sponges and slimming drugs," he said.

Prof. Edi added that local food genetic resources could be cultivated with intercropping systems so that they were environmentally friendly. Besides that, the variety of culinary arts is an important capital for building a system of food security and sustainable agriculture. (RYS)