Berry, Running As Far As 169 Kilometers For Disabled Education 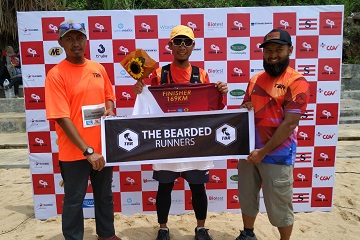 Disabled persons sometimes do not receive appropriate attention. In fact, those with disability status are entitled to live like normal human beings. Recognition of the right to a disability can now be said to be still lacking, even in some areas, persons with disabilities just do not get their rights.

To end this, Salasa Berry, Founder of The Bearded Runners running community, took part in charity activities called Nusantarun. An activity aimed at raising money for the education of children with disabilities by running hundreds of kilometers.
"I as a fundraiser and runner, trying to persuade the public that once campaigned to participate to donate and help the education of children with disabilities," said the alumni of the Department of Mechanical Engineering Faculty of Agricultural Technology and Biosystems (Fateta) Bogor Agricultural Univerrsity (IPB).

This year is the sixth year in the organization of activities Nusantarun. Nusantarun this time lasted for three days, starting on December 7 and ended on December 9, 2018. The starting line from Wonosobo, Dieng and the finish line is located in Gunung Kidul, Yogyakarta. There are two categories, namely category half run with a distance of 85 kilometers and a full category with a distance of 169 kilometer trajectory.

Berry admitted that for a run along the 169 kilometer need thorough preparation and practice. Before the day of Nusantarun started, Berry had to practice running at least three times a day for thirty minutes each session. The exercise she did for five days, from Monday to Friday. While Saturday and Sunday, he used to practice long-distance running with a distance of 20 kilometers per day. The exercise program is conducted over two consecutive months.
"We do all this so that the people were moved to join donating. On the other hand, we tried to make a broad impact as much as possible so that people can contribute through social movements that we do, "added Berry.

Counted until December 18, 2018, donations have been collected as much as 2.4 billion. These results almost met the target of donations, amounting to 2.5 billion rupiah. Although almost reached the target, the collection of donations is still open until January 11, 2019.

According to Berry, of the facts, persons with disabilities in Indonesia accounts for nearly 30 million people, or about 12.5 percent of the population in Indonesia.

"To advance the education of disability, this event took Campus Master Cikal so as to jointly provide education access for disability rights. All parties must strive so that education could be felt by everyone. Not only that, we also need to provide equal opportunities to persons with disabilities in order to grow and work together, "said Berry. (AVR)