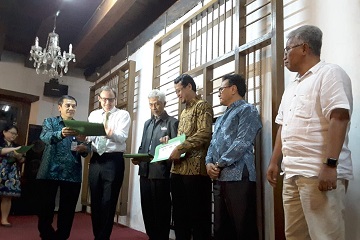 A research group led by Dr. Berry Juliandi from Department of Biology, Faculty of Mathematics and Natural Sciences, Bogor Agricultural University (IPB) achieved the distinguished British Council Wallacea Grant Newton Award of the Ministry of Research, Technology and Higher Education, on October 11th, 2018. The British Council is a British government organization that allocates research funding through an organization called the Newton Fund. Every year, this organization conducts research on diverse topics. One of the topics offered in 2018 is the Wallacea area. The team that was comprised of Dr. Berry (IPB), Prof. Daniel Mudiyarso (IPB), Prof. Jatna Supriatna (UI), Prof. Endang Sukara (LIPI) and Prof. Jamaluddin Jompa (Unhas), has published their research in 2017. An interesting finding on the Wallacea area, according to Dr. Berry, is an increasing human activity that has been heavily impacting on flora and fauna life, especially on Sulawesi Island, by oil palm plantations and other developments. Human activities that are increasingly widespread pushed the fauna habitat concentration of different species to be closer to each other, thus different species were forced to blend together and mate. Seven monkey species were investigated in Sulawesi and more and more hybrids were revealed. This phenomenon became a serious issue on species extinction. Those particular groups of species which initially were not able to mate with each other, now could mate, hence resulted in sterile offspring and eventually led to the species extinction. The team has been taking interest of this issue since 2001. The team collected data on animals, microbes, plants and biodiversity data, besides the millions-years-long geological and climatic data in Wallacea, to forecast Wallacea future model. This project is expected to assist the government in making decisions to maintain species preservation in Wallacea area.