Indonesia is the Second Largest Plastic Waste Contributor in the World 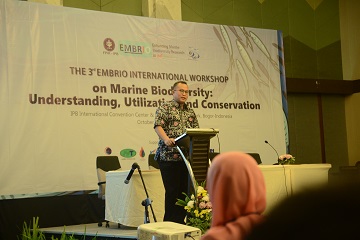 Assistant Deputy for Training and Education, Coordinating Ministry of Maritime Affairs of the Republic of Indonesia, Dr. TB Haeru Rahayu said that Indonesia was second only to China as the world's largest producer of plastic waste. This can be seen from the coronation of the Citarum River as the dirtiest river in the world. This was conveyed when he attended the International Workshop on Marine Biodiversity, Understanding, Utilization and Conservation at the Bogor Agricultural Institute (IPB) International Convention Center (IICC), Bogor (10/10).

The Government of Indonesia is committed to reducing waste through reduction, reuse and recycling (3R: Reduce, Reuse and Recycle) up to 30 percent by 2025. The government also targets a reduction of 70 percent plastic waste by 2025.

"Waste can no longer be managed only in the downstream, but also from upstream or before it becomes waste that is thrown away. Handling it directly to the source of the problem, involving all stakeholders, the mental community must change to play a role in reducing waste from upstream," he said at the event initiated by Enhancing Marine Biodiversity Research (EMBRIO), the Faculty of Fisheries and Marine Sciences (FPIK) of IPB.

Meanwhile, the Rector of IPB, Dr. In his speech, Arif Satria said that this activity was an arena for researchers to collaborate internationally in producing outstanding scientific works.

"IPB a few days ago held a seminar related to the Sustainable Development Goals (SDGs). We are committed to achieving the points listed in the SDGs. In the SDGS there are 40 elements related to underwater and 10 percent are conservation areas. We know that marine organisms contribute to many important processes that have direct and indirect effects on the health of the oceans and humans. What is clear is that certain species and functional groups play an important role in ecosystem processes. The loss of certain species may have a significant influence on the entire ecosystem. Therefore, why this two-day workshop is very important for the progress of all our lives through the provision of knowledge, technology, and science for the utilization and conservation of marine biodiversity," explained the Rector of IPB.

Meanwhile, according to the Director of the Embryo, Dr. Mala Nurilmala, on this first day, researchers and students from Japan and Australia (Embryonic partners) will present the results of their research. Then on the second day, there will be a coaching clinic that contains training on how to write in international journals from reputable speakers from writers both from Japan and from Australia.

"They will share how to write well. We want to support so that the papers in the marine biodiversity domain can be well publicized," he said in front of participants who came from all over Indonesia. Among them are researchers and students from Jakarta, Riau, Bandung, Aceh.

The hope is that participants can meet directly with the reviewers and then get additional information regarding how to write well to submit to reputable journals.

This was supported by the Dean of FPIK IPB, Dr. Ir. Luky Adrianto, who said that the Embryo is a new platform to improve publications including journals and proceedings to get better quality. The event was also part of a strategy to collaborate with each other between participants. (RYS)