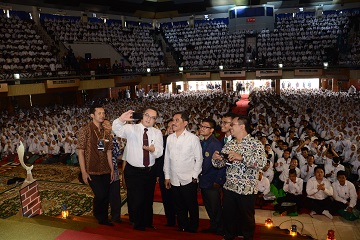 The Head of the National Body for Terrorism Management (BNPT) of Republic Indonesia, Commissioner General Police Drs. Suhardi Alius gave a bit of enlightment on the topic of the dangers and the preventive actions that can be taken on radicalism in front of thousands of freshmen.

“The challenges that we face are growing. What we need most now is not only intelligent people, but what we need is people with good character. You are all very lucky to have been enrolled in IPB. Therefore, gather as much knowledge as you can during your time in IPB to become people that are smart and of good character which will have an oppurtunity to become a leader of the future. Do not fool around, be serious about your studies. Your parents cry every night praying for your success,” he said.

“The meaning of the Youth’s Oath must be once again brought together. Bring back our nationality values. Do not ever forget history. Do not put stigmas on any religious issue. Compete with sportsmanship. Let us altogether see how we use our hearts, head, and logic,” he said.

General Commisonary Suhardi gave an example on cultural education in Japan which prioritzes manner. From how we treat our parents to queing ettiqute. This has lead the people of Japan to become well mannered people and become outstanding people without ever leaving their identity.

“Therefore, do not ever take for granted your oppurtunity of being an IPB student, remember your parent’s trust for you. If anything goes wrong, remember. Do not be afraid to give your opinion as long as it stays positive,” he explained.

During this oppurtunity, BNPT showed a few videos on how terrorists recruit and brainwash their victims. “These groups usually use brain washing towards their candidates from a young age. They have already targeted their candidates. Around 63.6 percent of them are high school graduates. The dangerous part is, their radicalism acts from social media have already been done. Now, smartphone users (in the youth circle) spend up to 181 minutes per day, which makes it easier for them to become influenced, especially through social media,” he explains. (AVR)