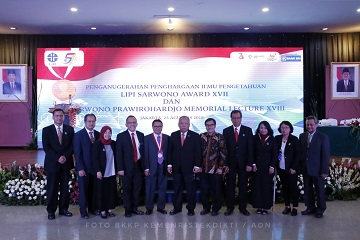 Professor of Atmospheric Sciences, Department of Geophysics and Meteorology, Faculty of Mathematics and Natural Sciences, Bogor Agricultural University (IPB,) Prof. Dr. Daniel Murdiyarso won the Sarwono Award XVII Indonesian Institute of Sciences (LIPI) for his dedication to science, especially in the field of climate change and the environment. This award was given on Thursday (8/23) to coincide with the 51st LIPI Anniversary at LIPI Jakarta Auditorium.

In addition to the awarding of the LIPI Sarwono Award XVII was also delivered Sarwono Prawirohardjo Memorial Lecture (SML) XVIII by the Minister of Public Works and Public Housing of the Republic of Indonesia, Basuki Hadimuljono. The LIPI Sarwono Award which is coupled with the Scientific Oration is an annual activity of LIPI as a leading scientific institution in Indonesia. This award is given to scientists who are consistent in their fields and contribute to progress both nationally and internationally.

"His scientific work has succeeded in changing the world's perception of climate change and inspiring all of us not to stay silent about what is happening around our environment," said Head of LIPI, Laksana Tri Handoko.

Prof. Murdiyarso is a member of the Intergovernmental Panel on Climate Change which together with Al Gore received the 2007 Nobel Peace Prize. An important momentum that aroused public concern regarding the issue of climate change. Prof. Murdiyarso also received the Ahmad Bakrie Award in 2010.

"The contribution I can give is consistent in the field of climate change, actively bridging dialogue between scientists and policymakers (science-policy dialogues), as well as publishing in reputable scientific journals," said Prof. Murdiyarso.

According to records, H-Index of Prof. Murdiyarso is 31 (Scopus version), 50 (google scholar version), and 40 (research gate version). The H-Index describes the number of publications published, read and referenced by others.

Further Prof. Murdiyarso explained, that knowledge must be communicated dialogically by policymakers. Because, without dialogue, knowledge will dry up. Without knowledge, the policy will be easily swayed.

In his speech entitled "Lonely Path of Researchers", the Professor of Cepu born on September 10 said, "Most researchers go through this path, away from the hustle and bustle of the world, the tumult of celebrations, popularity, and even material. The quiet path can help us differentiate between dependence and cooperation that produces fruits of goodness with a broader, lasting impact in a long period of time," he said.

Prof. Murdiyarso is also a senior researcher at the Center for International Forestry Research (CIFOR) which since 2001 has produced 122 scientific publications related to climate change due to land use change, biogeochemical cycles, greenhouse gas emissions from conversion of wetlands (peat swamp forests and mangroves) and forest and land fires.

Being a scientist is not an ideal of Prof. Murdiyarso who grew up in the middle of a rich teak forest and poor people around him. Inspired by his parents who are consistent in their fields as health nurses and nurses in a public hospital, Daniel Murdiyarso is loyal to the field he is currently practicing. "Like a bean plant that creeps up, my parents are like me," he said. Prof. Daniel hopes to always rely on the spirit and energy of life of his parents. "I am also very fortunate to have a family that has always been an oasis in the dry shortage of my scientific journey, giving inspiration and enthusiasm so that I remain standing and moves forward," said the Senior Researcher at CIFOR.

At the point where he is currently standing, the Professor of Atmospheric Sciences realizes that everything he experiences is not without difficulties.

"Difficulties are always there, not to complain about because just complaining of difficulties will not automatically disappear," he said. As a person who grew up in Javanese culture, Prof. Murdiyarso experienced what life taught to sumeleh. "Sumeleh is not giving up, but a form of awareness or attitude that we are ready to accept difficult things as responsibility and trust, not as a burden. Doing so is hard, but if we can do it, life will be easier," he added.

End the conversation, Prof. Murdiyarso hopes that Indonesia which currently already good, in the future will be even better and can lead in various ways in the global community. (RYS)